Speaking of books, I read an astounding 183 books!  I had a goal of 150, so clearly I exceeded expectations there.  According to goodreads, that amounts to 50,596 pages, which is a lot of pages. Overall, I really liked what I read, to the point that remembering what I don’t like is easier.  I really feel like I’ve gotten better at picking books I’m going to like, and that if I really strongly dislike something or am very not into something, I’m probably going to put it down and not finish it.  I’ve decided to aim for 160 books this year, and if the last couple years are any indication, then I’ll have no problem meeting that goal!  I don’t have much to add in terms of books, especially because I covered it pretty well in the bookish survey I did.  And my top books of 2013.  Oh, and this post I did my favorite new-to-me authors.

Writing this post is a little weird.  I’m so used to top ten lists and book reviews and Gilmore Girls recaps that writing something that isn’t one of those is really weird.  I definitely want to do more posts where I’m just talking about whatever, because I kind of miss those.  I’m not sure how often they’ll be, but at least one or two a month.

I get the Julep Maven box now!  I love nail polish, so a monthly box that contains nail polish is perfect for me.  There’s a really good chance I’ll be sharing them.  Like now! 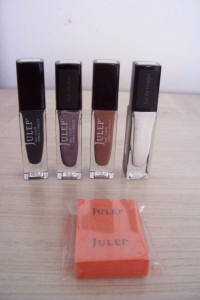 Left To Right: Mona, an add-on, and this months selection, Farrah, Annemarie, and Hope, plus, 2 unidentified orange squares

So, my box had Farrah, Annemarie, and Hope, and I decided that I like Mona (a nail polish included in a different box) enough to add that on to my box.  They also randomly include things sometimes, and I think the orange squares may be nail buffers, but I’m not quite sure…still, it’s always fun to get some mail that’s nice and fun.

Speaking of sharing, I think I’m going to share my crochet projects.  It wasn’t until last month that I actually started taking pictures of what I crochet (well, on a regular basis) because I was doing a few gifts for people and wanted to have pictures of what I made, so I might feature that too.  Even though I’ve been crocheting for a couple years, I still get intimidated, but I’d also like to get over that, so I’ll be trying new things as far as that goes.

Actually, I have a few ideas in mind for some fun posts, so when I hammer out the details, I’ll be sure to share!  There’s so much I want to do this year, both for my blog and in general, so I’ll do a post about resolutions sometime in the next week.  Once I narrow things down and such.  I’m definitely planning on taking a look back on the resolutions I did last year, so I think I want to take a look at that to figure out what to focus on this year.

I’m pretty sure I’m done rambling for today, so I hope everyone has a great 2014!