Currently Obsessed With is a once-a-month (but sometimes more) feature where I talk about my favorite things and the interesting things I find from the last month.

It’s June!  And we’re almost half-way through the year, which is weird.  It went by really fast.  And speaking of it being June, I had a birthday a few days ago.  I didn’t do much, other than go to the mall and get some lotion from Bath And Body Works ($5 sales are very dangerous, I’m amazed I walked out with a couple of things) and watched part of the Harry Potter marathon on ABC Family.  And I made a cinnamon roll cake.  It was yummy!

I’ve been crocheting (of course) and I made a couple of bags.  They’re quite stretchier than I expected, but that’s fine, since I’ve used one to bring in lunch and snacks to work.  I’ve been working on my blanket too, and it’s slowly getting bigger.  It’s long enough to keep half of my legs warm, and right now, it feels like I have so much more to go…and it also feels like I don’t have enough yarn to go.  But I’ll deal with it if it gets to that point, which will be quite a while at the rate I’m going. 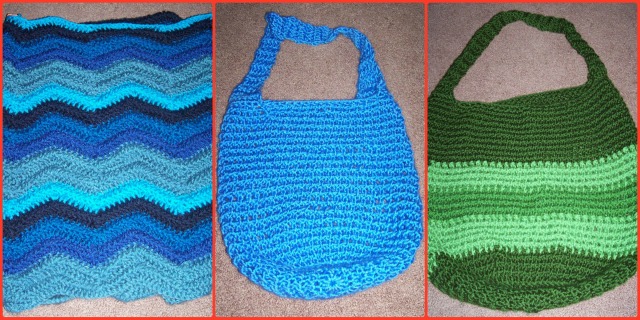 I’m working on a dishcloth, so I’ll be making a few of those since I have a bunch of cotton yarn that I don’t know what to do with. I did take a look through my stash a week or so ago, and there’s quite a bit of yarn I need to find projects for.  I know I’m not done with the blanket I have, but I am thinking about starting another one, using some yarn I forgot I had, as well as some left-over yarn from other projects.  A blanket seems like a good way to use it up, and it may come out completely ugly, since not all of the colors go together, but I don’t care, as long as I use it up.  Some of the left-over yarn…I’m pretty sure I’ll have to do several color changes in one row, since I have a bunch of yarn that I don’t want to get rid of, but isn’t enough to do anything else with.

I didn’t get anything in print this month, but I pre-ordered Winter, and got a few assorted e-books: Say Yes To The Marquess by Tessa Dare (if I buy enough romance, maybe I’ll read it?), Ancillary Justice by Ann Leckie (for book club, and I’m having trouble getting into it, and so I’m very much considering checking out the audio book from the library, because I really think I’ll get through it if I listen to it), Where The Stars Still Shine by Trish Doller, Afterworlds by Scott Westerfeld, and UnSouled by Neal Shusterman (all of which I’ve read, and wanted to have a copy of),  and Wildflower by Alecia Whittaker and The Second Mango by Shira Glassman (just because, but really, it’s because they were, like, 1.99 and it’s rare for me to find those sales through B&N for books I don’t have, but I love B&N, so whatever).

I also got Dangerous Deception from audible, and at the very least, I want to re-listen to Dangerous Creatures, because I’ve been on a re-listening kick lately, so after I finish the Parasol Protectorate and Ancillary Justice, I’ll probably move on to that. And go back to Ruby Red, since I’ve had to put it on hold for the second time recently.

I haven’t seen any movies since Age Of Ultron, but I have been watching t.v.!  Of course, I’ve seen all of the finales for the shows I watch, and I’m really curious about where some of them are going to go in the next season (especially Once Upon A Time, I wasn’t expecting that to happen, so I hope everything works out okay).  I don’t really watch a lot of the summer stuff, except for Food Network Star, and I keep meaning to watch So You Think You Can Dance, but I always forget to.  I’m trying something different this summer, in that I’m putting my HuluPlus subscription on hold.  Which is actually pretty awesome, and I don’t really use it during the summer, so I’m trying that out to see how it goes.

On Netflix, I’ve been watching Doctor Who, and I’ve finished the 7 seasons that Netflix has.  It’s fun, and I can’t believe it took me so long to watch it.  My favorite Doctors (from favorite to least favorite) are David Tenant (I wasn’t sure about him at first, but I really liked him), Christopher Eccleston and Matt Smith.  I know there’s another Doctor after Smith, but I’m not there yet, so I don’t where he’d fit in.  And as for the Companions, (favorite to least favorite), Rose is awesome, Donna is hysterical, the Ponds were pretty cool, and Clara (who’s not memorable to me, even though I just finished a season with her in it) and Martha (who seemed really boring and didn’t have much of a personality) were tied for least favorite.

I’m trying to figure out what to watch next, but I think I want to finish Breaking Bad, and after that, I might watch Sons Of Anarchy. I’ve been wanting to re-watch Gray’s Anatomy from the beginning, just to see how much the show has changed.  (I have watched season 1, and maybe I’ll randomly watch episodes).  And I’ve pretty much abandoned my Gilmore Girls re-watch, and I saw it in my Netflix queue the other day, and that reminded me that I pretty much abandoned it.  I should start watching it again, maybe after Breaking Bad and Sons Of Anarchy so I can actually feel like I’m focusing on it properly?  I am definitely not going to make promises, though, because I feel like I’ve said I’m going back to it and never do, and if I am going to start watching it again, I actually want to make sure I’m actually going to do it.

You can check out everything on Pinterest.  Which, by the way, I started adding the date in the pin description so I actually have an idea about when I’m pinning stuff.

It rained spiders in Australia.  I’m terrified of spiders, so I’m glad I wasn’t there for that.  It’s an interesting article, and if it had to be somewhere, Australia is where I can picture it happening.

This is an interesting map about the most popular book set in each state.

This story about a student-athlete who committed suicide was heart-breaking.  You never know what people are going through.

I loved this post about ballet and race.  (I totally want to read Tiny Pretty Things, by the way.  It looks amazing).

11 Icelandic Words And Phrases- my favorite is On With The Butter.

This post about the One Woman In Serious Literature is hysterical.  I totally want to know what books inspired this post.  And it brings up why I dislike so much the “strong, independent woman.”  It totally conjures up a certain type of character that irritates me immensely, and this post pokes at the that.  (I couldn’t pin it to pinterest, unfortunately, so you won’t find it there).

I haven’t been listening to a lot of music over the last month, but I do love these songs.