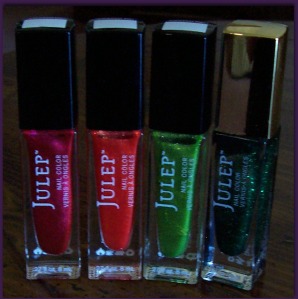 I really like this month’s Maven box!  I particularly liked Joyce, which surprised me, because red isn’t a color I normally go for. And I loved Kirti, which wasn’t a big surprise, since it was the one I figured I’d like.  I don’t know why, but I have been a big fan of the orange nail polishes I’ve worn.  Tammi- the yellow-green- was the one I wasn’t sure about it all, but I liked it a lot more than I expected!  I also bought Priscilla last month, and it’s part of Julep’s birthstone collection.  It really does remind me of emeralds, which is the birthstone for May.  It’s a full-coverage glitter, and I loved it!  As it’s glitter, it was a pain to remove, but it was worth it! And it didn’t chip that much, which is weird for a glitter polish, but I liked that it didn’t chip much after a week of wearing it.

I finally upgraded to the next tier in the Maven box subscription, starting with the September box, and I like the idea of being able to switch out a color I don’t like.  I don’t know how often I’ll do it, but it’s nice to have that option because sometimes, there are colors I’m not sure about, which is great for that random month when I like another color.  I’m sure I’ll have more thoughts about it once I’ve had it for a few months. 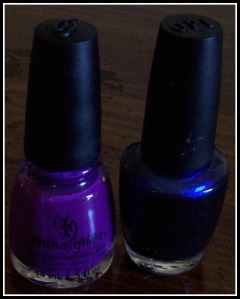 China Glaze’s X-Ta-Sea, Left, and OPI’s Into The Night, Right

I did get a couple of other bottle of nail polish recently- X-TA-SEA from China Glaze, and Into The Night from OPI.  I like both, but I kind of like the OPI one a little bit better.

Also: I am on a weird make-up kick right now, which is weird, because it’s something I wear only every once in a while.  But I LOVE this tinted lip treatment from Fresh.  I like that the color is really light, but it’s really moisturizing, which is awesome, because my lips do get chapped, and it really helps!

I love this eyeshadow from Urban Decay, and have it in Last Call.  I love that how much the color shows up, and even though I’ve only worn it a handful of times, I liked it so much that I just got the Naked3 palette, which I think will be better for everyday life, while Last Call seems better suited for something fun.  (More on the Naked3 palette next month, after I’ve used it).

The Lemonade Cookbook by Alan Jackson (no, not the country singer), and The Family Cooks by Laurie David

I doubt it’s surprising I got more cookbooks- I just can’t stay away from them!  I do have a few I have my eye on, but I think I’m going to wait a bit, until I cook a bit more from the ones I have.  On the plus side, I should have quite the cookbook wish-list when I am ready for more cookbooks…

I’m probably going to make exceptions for Seriously Delish, because her blog is awesome, and Joy The Baker’s Homemade Decadence.  Joy, by the way, also has an awesome blog and an awesome cookbook!

And my audible credit this month went to You Look Different In Real Life by Jennifer Castle, which I’m looking forward to listening to!  It’s an interesting idea, and I’m hoping I like it a lot!

Last month, I saw Guardians Of The Galaxy, which was so fun to see!  And the soundtrack is just as fun- after seeing it, I knew I had to get the soundtrack.  I ended up seeing it in IMAX 3D, which I actually really liked.  I also saw The Giver and If I Stay in August, but there are spoilers in both reviews, so just keep that in mind if you click on over.

I haven’t been watching much t.v.- at least, not much on Netflix/Hulu.  I’m slowly making my way through Blue Bloods (still! but I am on season 2 now) and I’ve watched most of the pilot of Flashpoint, which I’ve randomly seen a few episodes of and liked.  Really, I’ve had the Food Network or the History Channel on in the background, because I’ve needed background noise while I stare at pinterest and random things on the internet.  But I am glad that fall t.v. is coming back soon, because I’ve missed my usual rotation…which may cut into catching up on other shows time, but who knows?

I’ve seen so many cool things this month!  I’ve decided to go for my favorites and the really interesting posts.

My all time favorite thing I’ve heard about is this letter J.K. Rowling sent to a teen who lost her family in a shooting.  J.K. Rowling is just awesome.

This DIY creepy doll mobile was posted ages and ages ago, but I just came across it for the first time, and I so want to make it!

Apparently, people think that Stephanie Meyer is going to ruin people’s childhoods by producing a movie adaptation of a Lois Duncan book and that makes me so mad, because if it were literally anyone else, no one would even care.  I just hate that people are making assumptions based on their hatred of her previous work, which has nothing to do with producing a movie. I want it to do well, but I have the feeling that if it’s “horrible” (and that’s totally subjective) and it completely bombs, Stephanie Meyer is going to get blamed, even if it has nothing to do with her ability as a producer.

I thought this post about YA and New Adult was interesting.

And I really want to make these pumpkin chocolate chip cookies and these sausage muffins.

Finally, I thought this list of books by women under 50 is one to check out!  I really want to read some of these books now.

I bought a ridiculous amount of music last month, but weirdly enough, I didn’t get a chance to listen to much of it…mostly because there were some songs I couldn’t get enough of.  I normally pick a few songs to share, but this month, I’ve decided to share the entire playlist, because I just can’t pick a few to share.