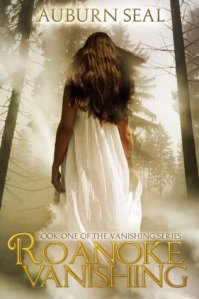 When The Lost Colony of Roanoke vanished mysteriously in the late sixteenth century, Elinor Dare’s fate–and that of her family–was lost to the world. Now it’s 2013 and Avery Lane, an over-zealous master’s student, is determined to find out what happened to those who disappeared from England’s first colony.

The Descendants have discovered her interest and will stop at nothing to ensure the secret remains buried. Elinor, her spirit having lingered for more than four hundred years, is Avery’s only chance to evade the Descendants and solve one of America’s most intriguing mysteries.

I liked Roanoke Vanishing!  I wasn’t sure about it at first, but the more I listened to it, the more I liked it!

Stories that have a dual timeline (where part of the book is in the present and part of the book takes place in the past) are hit-and-miss, but I loved that this book had both past and present in it!  I liked that as Avery was going further into the history of Roanoke, we had the story of the colony of Roanoke woven in.

I really liked both stories and how they were connected and how they came together in the end.  I also thoughts the hints of something paranormal were interesting.  I mean, you do see a couple of ghosts, but with two groups mentioned- the Descendants and the Guardians- you know something paranormal is going to unfold in this series.  Nothing overtly paranormal happens, but I’ve definitely read enough of the paranormal to know when it’s going to pop up.  And I certainly can’t wait to see this prophecy and how everything is going to play out.  Between the inhabitants of Roanoke in this book, and the Mayans that we’re going to see in the next book…what other lost civilizations are we going to see, and why is their story so important?

It’s not bad, mind you, and it’s actually interesting that Seal went with the mystery of lost colony.  I definitely feel like there’s something connecting all of them, and that there’s something big that’s been a long time coming.  I’m looking forward to reading the next book to see where things are headed.

I liked Caprisha Page as the narrator, and she did great as both Elinor and Avery.

I liked Roanoke Vanishing and I’m looking forward to the next book!  I didn’t fall in love with it, and I have no idea why because on paper, it so many things I like in a book, but it was still an enjoyable listen.  Roanoke Vanishing gets 3 stars.