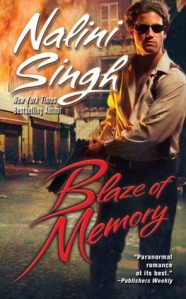 Dev Santos discovers her unconscious and battered, with no memory of who she is. All she knows is that she’s dangerous. Charged with protecting his people’s most vulnerable secrets, Dev is duty-bound to eliminate all threats. It’s a task he’s never hesitated to complete…until he finds himself drawn to a woman who might prove to be the enemy’s most insidious weapon yet.

Stripped of her memories by a shadowy oppressor and programmed to carry out cold-blooded murder, Katya Haas is fighting desperately for her sanity. Her only hope is Dev. But how can she expect to gain the trust of a man who could very well be her next target? For in this game, one must die…

I’ve really enjoyed this series, and this book is no exception.  I’m actually kind of in the middle for this one- I liked it a lot but I didn’t love it and I didn’t hate it.

I think the thing that surprised me the most was how much the romance took a backseat to everything else that was going on.  I didn’t care for Katya and Dev as a couple, and there was a lot we learned about Silence and the Forgotten in this book.  I thought it overshadowed the romance, which made me a little sad because partially why I like this series is the romance.

Okay, I haven’t loved every couple, and Katya and Dev are not one of my favorites.  But I really felt like the romance was secondary to the world-building.  That’s the other thing that keeps me going with the series, and that really stood out in this book.  We learned a lot about Dev’s family, and I liked seeing the letters written by one of his relatives to another relative.

I really liked seeing those letters, because you really see how implementing Silence changed things for all Psy.  You really see how it affected those who didn’t want to be part of it, and how they were cut off from those they loved because they didn’t believe in it.  We also learn a lot about the abilities that died out when the Forgotten defected.  I’m curious to see if we’ll learn more about those long-lost abilities, and if they’ll start popping up again.

I also liked seeing the Sunshine station or whatever you want to call it.  It makes me wonder where Singh is going with it, and if we’ll learn what’s going on there.  I’m sure we will, because I feel like Singh introduces characters and concepts long before we actually learn what’s going on.

Also…I’m starting to wonder if the Ghost is an Arrow.  I was pleasantly surprised by what we see in regards to the Arrows, and I’m curious to see who the Ghost is.  I know I mention in every single review I’ve done for this series, but this is the first time where I’ve really felt like I could even begin to come up with some possibilities.

My Rating: 4 stars.  I really liked what we learned about the Forgotten and Silence, but I wish I liked the romance more. 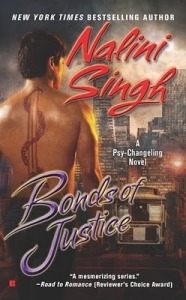 Max Shannon is a good cop, one of the best in New York Enforcement. Born with a natural shield that protects him against Psy mental invasions, he knows he has little chance of advancement within the Psy-dominated power structure. The last case he expects to be assigned is that of a murderer targeting a Psy Councilor’s closest advisors. And the last woman he expects to compel him in the most sensual of ways is a Psy on the verge of a catastrophic mental fracture…

Sophia Russo is a Justice-Psy, cursed with the ability to retrieve memories from men and women so twisted even veteran cops keep their distance. Appointed as Max’s liaison with the Psy, she finds herself fascinated by this human, her frozen heart threatening to thaw with forbidden emotion. But, her mind filled with other people’s nightmares, other people’s evil, she’s standing on the border between sanity and a silken darkness that urges her to take justice into her own hands, to become judge, jury…and executioner…

I really liked this one!  I particularly liked the romance in this one, which was a nice change after reading Blaze Of Memory, and finding that the romance took a backseat to the world-building.

Don’t get me wrong, I liked the world-building in this book.  We learn about the J-Psy, and that was cool.  I mean, they can retrieve memories from people, and eventually, they’re rehabilitated so much that they go insane or die.  I am curious to see how her abilities are used in the future.  Even though she’s perfectly fine at the end of the book, I still want to know if her continued use of her ability will eventually damage her shields, and if everything going on with PsyNet will do some damage.

As for the romance, I really liked Max and Sophia together.  I think, with her abilities and his work in Enforcement, they really understand what the other has to deal with at work, and they really balance each other out.  I know Enforcement has come up in this series, but even after finishing Bonds Of Justice, I’m still not clear what they do.  Still, I’m hoping we’ll see more of Max and Sophia in some of the other books.

I really liked seeing the Council, and how they split.  I do like seeing them fight for control and power, and with the Council being so divided, it’s going to be very interesting to see how that will tie into everything going on with the PsyNet, and how it’ll affect not just the Psy, but the humans and changelings as well.

This book seemed more grounded in reality than a lot of the other books in the series.  I am particularly fond of the psy-changeling romances we’ve seen, and overall, I prefer those romances to all of the non-psy-changeling romances we’ve seen.  I think I expected more paranormal elements, and this book didn’t really have it.  Paranormal elements or not, I really did like this one.

My Rating: 4 stars.  I really liked Bonds Of Justice, and I liked Max and Sophia together.