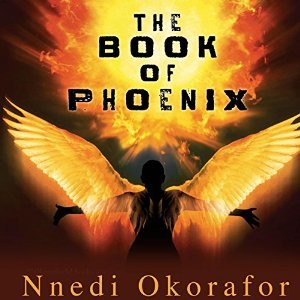 Book: The Book Of Phoenix by Nnedi Okorafor, Narrated by Robin Miles

A fiery spirit dances from the pages of the Great Book. She brings the aroma of scorched sand and ozone. She has a story to tell….

The Book of Phoenix is a unique work of magical futurism. A prequel to the highly acclaimed, World Fantasy Award-winning novel Who Fears Death, it features the rise of another of Nnedi Okorafor’s powerful, memorable, superhuman women.

Phoenix was grown and raised among other genetic experiments in New York’s Tower 7. She is an “accelerated woman” – only two years old but with the body and mind of an adult, Phoenix’s abilities far exceed those of a normal human. Still innocent and inexperienced in the ways of the world, she is content living in her room speed reading ebooks, running on her treadmill, and basking in the love of Saeed, another biologically altered human of Tower 7. Then one evening Saeed witnesses something so terrible that he takes his own life.

Devastated by his death and Tower 7’s refusal to answer her questions, Phoenix finally begins to realize that her home is really her prison, and she becomes desperate to escape. But Phoenix’s escape, and her destruction of Tower 7, is just the beginning of her story. Before her story ends, Phoenix will travel from the United States to Africa and back, changing the entire course of humanity’s future.

I really liked The Book Of Phoenix!  Nnedi Okorafor always writes really interesting books, and this one was no exception.

This one is a prequel to Who Fears Death, and I kind of wish I had re-read that one first, just to get back into this world.  Also, I couldn’t begin to tell you how the two books are connected, but maybe I’ll re-read Who Fears Death just to see.

I did like Phoenix, and I thought it was horrible what people were doing to the biologically altered.  I do remember wondering how we got to the future we saw in Who Fears Death, and I am thinking that maybe everything we see in this book is what leads to that future.  I could be wrong, and I really am wishing I had re-read Who Fears Death.  But that is what I get for randomly deciding to read a book without re-reading any of the other books in that series.

That being said, I thought the book stood on its own really well, and I don’t think the order in which you read the books matters.  Also, you could probably read just this one, and be fine.  It is its own story, and I liked seeing Phoenix try to take down the towers and fight back against her controllers.

The Book Of Phoenix worked really well as an audio book.  It’s an oral history, told by Phoenix herself, and I felt like Phoenix was telling me her own story, which really worked.  Also, it’s narrated by Robin Miles, who is a fantastic narrator.  I’ve really liked the books I’ve listened to that have been narrated by her, and this one was no exception.  I’m really glad I went with the audio, and I wholeheartedly recommend the audio book.

4 stars.  I wish I had more to say about this book, but I don’t.  I really liked it, and I love how Okorafor blends fantasy and sci-fi.