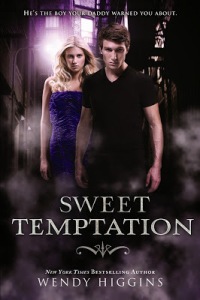 Bad boy Kaidan Rowe has never wanted for anything—money, popularity, musical talent…hot girls—but seducing them is part of his duty as a Nephilim, slave to the demon Dukes. As the son of the Duke of Lust, Kaidan has learned his father’s ways, becoming a master of passion, a manipulator of chemistry. Disobeying his father would mean certain death. Thankfully for Kaidan, he’s good at his job. And he enjoys it.

Until he meets Anna Whitt—smart, feisty, and inexplicably good—the one girl seemingly immune to his charms. The daughter of a guardian angel and a fallen one, she makes him wish for more than he could ever deserve.

Determined to save all the Neph from their dark lives, Anna joins forces with Kaidan to overcome the Dukes’ oppressive ways. In the light of her affections, Kaidan must undergo his toughest test of all, a battle of the heart.

Sensual and swoonworthy, this companion volume to the Sweet Evil series, told from the perspective of the mysterious Kaidan Rowe, gives readers revealing insights into the true emotions that drive him.

I’ve really loved this series, so I knew I had to read Sweet Temptation!  I knew it was the series told from the perspective of Kai, and I was really excited to read the events of the series from his perspective.  I didn’t love it, but it was interesting to see things from his POV.

I think, if you love the series, you’ll probably like this one.  I know I did, even though I wasn’t enthused about it.  It really is more of a companion novel than an actual sequel, though I would recommend reading the other three books first.

It did feel like I was reading random scenes from Kai’s perspective, and it didn’t feel completely cohesive as a story. The other thing I noticed when I was reading it was how it felt like things were really crammed into one book.  Higgins covers events from all three books in the original trilogy, and it did feel like a re-hash of the series so far.  I know that’s sort of the point, but even having not read the series in ages, I was able to keep up with what was going on.

I think I was expecting a slightly different story.  I don’t know that I’d want to read the entire series from Kai’s perspective, but still…it felt like there was too much going on.  To the point that I felt like we didn’t really get to see what Kai was truly thinking.  I got the general idea of what things were like for him during the series, but overall, that’s how I’d describe this book.  A general idea of Kai’s perspective on things.  Thinking about it, I really wanted something a little more from Kai and this book, but it was still a fun and entertaining read.

3 stars.  I did like it, and it’s a great book for fans of the series, but it felt like it was rushed and covered too much time in a short span of time.