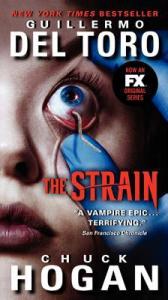 A Boeing 777 arrives at JFK and is on its way across the tarmac, when it suddenly stops dead. All window shades are pulled down. All lights are out. All communication channels have gone quiet. Crews on the ground are lost for answers, but an alert goes out to the CDC. Dr. Ephraim “Eph” Goodweather, head of their Canary project, a rapid-response team that investigates biological threats, gets the call and boards the plane. What he finds makes his blood run cold.

In a pawnshop in Spanish Harlem, a former professor and survivor of the Holocaust named Abraham Setrakian knows something is happening. And he knows the time has come, that a war is brewing.

So begins a battle of mammoth proportions as the vampiric virus that has infected New York begins to spill out into the streets. Eph, who is joined by Setrakian and a motley crew of fighters, must now find a way to stop the contagion and save his city – a city that includes his wife and son – before it is too late.

I’ve wanted to read The Strain for a while, and finally picked it up a few weeks ago.  It was a pretty interesting book, and I liked the idea of the book a lot.  Vampires by way of a virus isn’t a new idea (Julie Kagawa’s Blood Of Eden trilogy comes to mind), but I liked seeing it as it happened and as the CDC tries to figure out what’s going on.

I did like The Strain, and I know at one point, it was a t.v. show- I have no idea if it’s still airing, but either way, the entire time I was reading it, I kept thinking about how it would be a great t.v. show.  It really was written like it was meant to be on t.v., and I’m not sure if it’s because the book was written with the intention of eventually being adapted for t.v., or if it’s something that, because of what it’s about, would be great to watch.

It was hard to put down, though, and I found I really liked Abraham Setrakian.  The other characters…not so much, but since it’s been a few weeks since I’ve read the book, Abraham is the only character I actually remember.  I think I vaguely remember a nanny from Haiti, and I vaguely remember her being really interesting, and wanting to know more about her story, but other than that, I couldn’t tell you about any of the other characters if my life depended on it.

3 stars.  I did like The Strain, and it was definitely a page-turner that would be really interesting to watch. Most of the characters didn’t stick with me, but I did like the premise of the book, and the vampires were definitely horrible and creepy.