So, last week, I had a mini-vacation!  Not that you could tell, because I had posts scheduled while I was gone. But I went up to Oregon for my cousin’s wedding, and I really wanted to talk about my trip and share some of the pictures I took while I was up there.

I was reading like a maniac prior to leaving, because it’s a long car ride up to where she is- she lives not too far from the California-Oregon border, and I knew I’d need something to do in the car, so I wanted to make room for the books I was planning on reading.  Plus the three crochet projects I brought up with me so I could alternate between reading and yarn.  And randomly looking out the window.  But there was no sleeping in the car, because once I’m awake, I’m awake, and there’s no going back to sleep.  Plus, I got caught up on a few podcasts that I was behind on during the trip up there and back.

The wedding was really nice, and I’m really glad I got to go.  It was pretty casual, and it rained a little, but at least the rain held off until after the wedding…which was outdoors, and even then, it rained a little and then everything was fine.  I didn’t get any pictures of the actual wedding or the reception, mostly because I don’t have a smart phone, and felt awkward busting out the digital camera.  I wish I got a picture of the cake, which was really cool- it was a Wonder Woman/Batman cake!  The centerpieces were pretty cool too- flowers inside of cassettes, which I assume were glued together (I didn’t think of getting a picture until the next day, but there’s nothing I can do about that.  Same thing with the place settings, which were records!

Now it’s picture time!  Of which there are a few.

There are a couple pictures from the venue I wanted to share, which was super pretty.  It’s on this one estate, and I’m glad I got a few pictures.  Like the one below.

I’m pretty sure that the creek in the background is Eagle Creek.

This next picture is a few feet away, and a different part of the creek.

There was even some chairs, if you wanted to sit by the creek.  I have a few more pictures, but they’re all pretty similar, and these two are my favorites.

We didn’t do much while we were up there, but I did get see the family I have up there, which was nice, because I don’t see them often.

The next few pictures are from a winery/vineyard we went to.  There are a ton of them in Oregon (at least, in the part we were in, I can’t say it’s the same for the rest of the state), and the one we went to was DanCin.

The wine was really good!  And yes, I did take a picture of the wine I had.  I’m not the biggest fan of red wine- I’d rather drink white, which is why I got the above wines, but the reds were pretty good.  And totally local to the area, of course.

The menu looked pretty cool, like cork!  Which is oddly appropriate for a winery/vineyard.

We also sat in front of this really pretty fish pond.  I didn’t get the best picture of the pond, but you can catch a glimpse of it behind the plants.  I have a few more pictures of the pond/garden, but this one was the best one, in my opinion.

And I did get a few pictures of the actual vineyard, but the one below is my favorite.  Basically because it’s part of the vineyard up close, and not a far-off picure with random cars in the background. 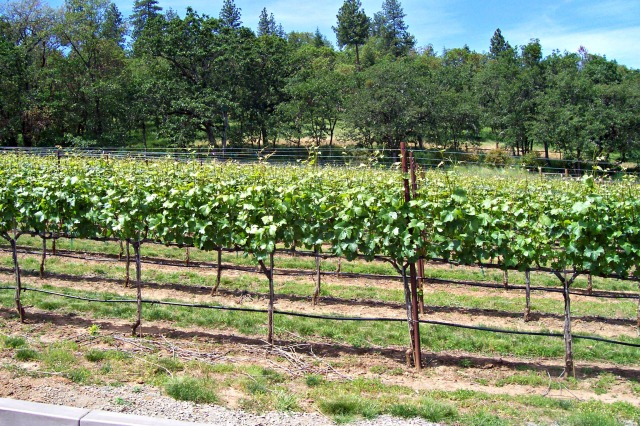 And on the way up, we stopped to take a picture of Mt. Shasta.  It’s the snow capped mountain you see in the distance.

Those are all the pictures I have- everything else was pretty similar to what I shared, or didn’t turn out as well as I hoped.  We did drive through this historic town called Jacksonville.  I didn’t get any pictures, as I thought they’d turn out blurry since we were driving.  They have this historic cemetery, and it was pretty but also a little overrun, which somehow seemed to fit.  In a way, it reminded me of Old Town San Diego, but a lot quieter.

It really is pretty, and there are lots of trees and mountains.  Also farm land, rivers and creeks.  It’s quite different than what I’m used to in San Diego, but it was really cool to see, because it is so different.

Happy Friday, and have a great weekend!  Hope you enjoyed the pictures!