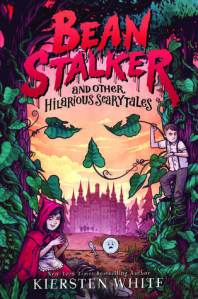 Book Review: Beanstalker And Other Hilarious Scarytales by Kiersten White

Once upon a time, a girl skipped into the forest and became a zombie.

Wait, no, that’s not how this story is supposed to go. Let’s try again.

Once upon a time, a boy did a horrible job as a sheep-sitter and burned his tongue on stolen pie.

No, children in these stories are always good and virtuous. From the top.

Once upon a time, a king and queen tried to find a princess for their son to marry, and he wound up fleeing from a group of very hairy vampires.

What about, once upon a time, a bunch of fairy tales got twisted around to be completely hilarious, a tiny bit icky, and delightfully spooky scarytales… in other words, exactly what fairy tales were meant to be. Grab some flaming torches, maybe don’t accept that bowl of pease porridge, and get ready for a wickedly fun ride with acclaimed author Kiersten White and fairy tales like you’ve never heard them before.

I really liked Beanstalker, but that’s no surprise, considering I love Kiersten White.  What is surprising is that I still haven’t started Slayer, but I’ll have to read it soon.

Beanstalker is a really cute middle grade.  The versions that White did of the different fairy tales are really funny, and really original.  It’s still the fairy tales we all know and love but with vampires and zombies and lots of other cool stuff.

It’s quirky and she did a great job at turning every single story on its head.  I wouldn’t expect anything else from her.  Even if I didn’t know she wrote Beanstalker, I’d know it was written by her, because it has the humor and writing style I’ve gotten to know with all of her books.

The illustrations were really cool, and I liked the rhymes that separated each story.  It would be interesting to see her write these same stories for a slightly older audience, because there are a lot of interesting directions she could go.  Still, I can see a lot of kids really liking it.

4 stars.  Beanstalker is a cute middle grade book, full of really funny re-tellings.  It’s not my favorite Kiersten White book, but I still really liked it! 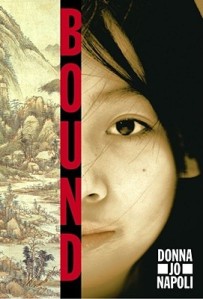 Young Xing Xing is bound.  Bound to her father’s second wife and daughter after Xing Xing’s father has passed away. Bound to a life of servitude as a young girl in ancient China, where the life of a woman is valued less than that of livestock. Bound to be alone and unmarried, with no parents to arrange for a suitable husband. Dubbed “Lazy One” by her stepmother, Xing Xing spends her days taking care of her half sister, Wei Ping, who cannot walk because of her foot bindings, the painful but compulsory tradition for girls who are fit to be married. Even so, Xing Xing is content, for now, to practice her gift for poetry and calligraphy, to tend to the mysterious but beautiful carp in her garden, and to dream of a life unbound by the laws of family and society.

But all of this is about to change as the time for the village’s annual festival draws near, and Stepmother, who has spent nearly all of the family’s money, grows desperate to find a husband for Wei Ping. Xing Xing soon realizes that this greed and desperation may threaten not only her memories of the past, but also her dreams for the future.

In this searing story, Donna Jo Napoli, acclaimed author of “Beast and Breath,” delves into the roots of the Cinderella myth and unearths a tale as powerful as it is familiar.

I really like fairy tale re-tellings, and I was really intrigued by a Chinese re-telling of Cinderella.  Especially because I loved Cinder.  I liked it, but not as much as I liked Cinder.  However, if you want something a little more historical, and a little less dystopic, this is definitely a good book to check out.

Because of the setting, it’s a slightly different take on the Cinderella story we’re familiar with, partly because of Disney and partly because of the different Roger’s & Hammerstein versions out there (of which the Whitney Houston one is my favorite, but probably because it’s the only one I’ve seen, not counting the Disney version).  It seems like there are more variations on the Cinderella story across different time periods and continents that any other fairy tale out there, and this episode of The History Chicks does a great job at going over all of the different variations.

3 stars.  It’s a pretty straightforward re-telling of one of the many variations of the Cinderella story, and I love the setting.  I like that it re-tells a version most Americans probably aren’t familiar with, but at the same time, I wanted some sort of twist on the story we all know.