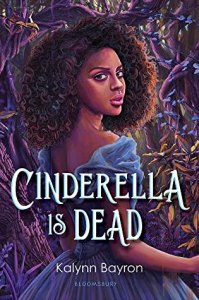 It’s 200 years after Cinderella found her prince, but the fairy tale is over. Teen girls are now required to appear at the Annual Ball, where the men of the kingdom select wives based on a girl’s display of finery. If a suitable match is not found, the girls not chosen are never heard from again.

Sixteen-year-old Sophia would much rather marry Erin, her childhood best friend, than parade in front of suitors. At the ball, Sophia makes the desperate decision to flee, and finds herself hiding in Cinderella’s mausoleum. There, she meets Constance, the last known descendant of Cinderella and her step sisters. Together they vow to bring down the king once and for all–and in the process, they learn that there’s more to Cinderella’s story than they ever knew…

This fresh take on a classic story will make readers question the tales they’ve been told, and root for girls to break down the constructs of the world around them.

I really liked Cinderella Is Dead, and I’m really glad I read it!

This is a very unique take on the Cinderella story.  Centuries after the death of Cinderlla, and Lille is a horrible place to live, especially where women and girls are concerned.  They’re abused and at the mercy of men, and it’s up to Sophia and Constance to take down Prince Charming so all women can have better lives.

I was not expecting Prince Charming to be so horrible, but he was.  He executed a seamstress, accusing her of helping Sophia leave because all Sophia did was stop in her shop.  Prince Charming is definitely the villain in this story, and Cinderella’s step-mother and step-sisters were part of the resistance against Prince Charming.  Centuries later, they’re still fighting against a man who uses the souls of young women to stay alive.

Also cool was the take on the fairy godmother- she’s a witch, the mother of Prince Charming, and the reason he’s still in power.  But she’s also the reason he was able to not be in power.  So even though we thought she was on our side, only to see that she wasn’t, she still did the right thing, and helped break the curse on this really tiny town.

I like that we questioned the version of the story we got, and I loved that the version put out by the palace had nods to the original fairy tale, and not the Disney movie.  Which I love, don’t get me wrong, but this story was dark, and I’m glad it used some of the original story.  By the end of the book, we learn so much about what happened to Cinderella both before and after her marriage to Prince Charming, and it really makes you think about the stories we’re told.

What really happened is so completely different than the story the palace puts out, and there are some pretty big differences between the two.  I am glad that we get the real story, and that it’s the one that everyone knows as well.  They have a lot of work ahead of them, but they’re definitely on the right path.

I liked Sophie, and I felt really bad for her.  Her parents didn’t seem accepting of who she was, and I get that her world is not accepting of anyone who is part of the LGBT community.  We see it with her, her best friend and another character that we meet.  Unfortunately, I can’t remember his name, but he was willing to make a run for it with Sophia, and try to have a better life somewhere else.

With her best friend in particular, it was hard to tell if she felt the same way, but couldn’t reciprocate because she was worried about what would happen to her and her family.  Maybe she didn’t feel the same way towards Sophia.  Either way, her eventual husband was this horrible, abusive man, and it’s sad that they had to live in a world like that.  No one should have to live like that, and I’m glad that Sophia and Constance were able to change things.  They made it very clear that things were going to change, and that there will be consequences.

4 stars.  I really liked Cinderella Is Dead, and it’s such a different but really cool take on a story we all know.

A romantic and fantastical reimagining of the classic Cinderella tale, Gilded Ashes is a novella by Rosamund Hodge set in the same world as the author’s debut novel, Cruel Beauty.

Orphan Maia doesn’t see the point of love when it only brings pain: Her dying mother made a bargain with the evil, all-powerful ruler of their world that anyone who hurt her beloved daughter would be punished; her new stepmother went mad with grief when Maia’s father died; and her stepsisters are desperate for their mother’s approval, yet she always spurns them. And though her family has turned her into a despised servant, Maia must always pretend to be happy, or else they’ll all be struck dead by the curse.

Anax, heir to the Duke of Sardis, doesn’t believe in love either—not since he discovered that his childhood sweetheart was only using him for his noble title. What’s the point of pretending to fall in love with a girl just so she’ll pretend to fall in love with him back? But when his father invites all the suitable girls in the kingdom to a masked ball, Anax must finally give in and select a wife.

As fate would have it, the preparations for the masquerade bring him Maia, who was asked by her eldest stepsister to deliver letters to Anax. Despite a prickly first encounter, he is charmed and intrigued by this mysterious girl who doesn’t believe in love. Anax can’t help wishing to see her again—and when he does, he can’t help falling in love with her. Against her will, Maia starts to fall in love with him too. But how can she be with him when every moment his life is in danger from her mother’s deadly bargain?

HarperTeen Impulse is a digital imprint focused on young adult short stories and novellas, with new releases the first Tuesday of each month.

I really liked GIlded Ashes.  It’s been ages since I’ve read Cruel Beauty, which is in the same world as this book, but you don’t need to read that one in order to read this one.

It’s a really interesting and different take on Cinderella, and I liked that her mother was still around, even though it was in spirit.  This is a lot darker than I thought it would be, but I liked it.  It wasn’t sunshine and rainbows, and it was definitely creepy at times, but it worked for this book.

I liked that I didn’t need to remember anything from Cruel Beauty in order to understand this book.  It stands on its own pretty well, and a novella length was perfect for this book.  Part of me wishes it were longer, and I’d love more details about the characters and the world.  It would be really interesting as full-length story.  But at the same time, I like how condensed it is.  It’s not bogged down in details and it gets right to the point.  Plus, there are other (full-length) stories in the same world for something that has a little more detail to it.  I guess I have some mixed feelings about the length, but either way, I still liked Gilded Ashes.

I liked the relationship between the sisters.  They weren’t constantly fighting, though they did have their moments.  Something about their relationship makes me think of the relationship Cinder has with her step-sisters and stepmother in the Lunar Chronicles.

If you like fantasy, re-tellings and Cinderella, this is definitely worth checking out.

3 stars.  I liked Gilded Ashes, especially Maia and the world she lives in.

Young Xing Xing is bound.  Bound to her father’s second wife and daughter after Xing Xing’s father has passed away. Bound to a life of servitude as a young girl in ancient China, where the life of a woman is valued less than that of livestock. Bound to be alone and unmarried, with no parents to arrange for a suitable husband. Dubbed “Lazy One” by her stepmother, Xing Xing spends her days taking care of her half sister, Wei Ping, who cannot walk because of her foot bindings, the painful but compulsory tradition for girls who are fit to be married. Even so, Xing Xing is content, for now, to practice her gift for poetry and calligraphy, to tend to the mysterious but beautiful carp in her garden, and to dream of a life unbound by the laws of family and society.

But all of this is about to change as the time for the village’s annual festival draws near, and Stepmother, who has spent nearly all of the family’s money, grows desperate to find a husband for Wei Ping. Xing Xing soon realizes that this greed and desperation may threaten not only her memories of the past, but also her dreams for the future.

In this searing story, Donna Jo Napoli, acclaimed author of “Beast and Breath,” delves into the roots of the Cinderella myth and unearths a tale as powerful as it is familiar.

I really like fairy tale re-tellings, and I was really intrigued by a Chinese re-telling of Cinderella.  Especially because I loved Cinder.  I liked it, but not as much as I liked Cinder.  However, if you want something a little more historical, and a little less dystopic, this is definitely a good book to check out.

Because of the setting, it’s a slightly different take on the Cinderella story we’re familiar with, partly because of Disney and partly because of the different Roger’s & Hammerstein versions out there (of which the Whitney Houston one is my favorite, but probably because it’s the only one I’ve seen, not counting the Disney version).  It seems like there are more variations on the Cinderella story across different time periods and continents that any other fairy tale out there, and this episode of The History Chicks does a great job at going over all of the different variations.

3 stars.  It’s a pretty straightforward re-telling of one of the many variations of the Cinderella story, and I love the setting.  I like that it re-tells a version most Americans probably aren’t familiar with, but at the same time, I wanted some sort of twist on the story we all know.