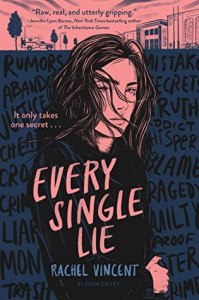 Published January 2021 by Bloomsbury YA|324 pages

In this gripping YA novel about social media bullying and half-truths, one girl’s discovery of a dead baby in her high school locker room rocks an entire community.

Nobody in Beckett’s life seems to be telling the whole story. Her boyfriend Jake keeps hiding texts and might be cheating on her. Her father lied about losing his job before his shocking death. And everyone in school seems to be whispering about her and her family behind her back.

But none of that compares to the day Beckett finds the body of a newborn baby in a gym bag-Jake’s gym bag -on the floor of her high school locker room. As word leaks out, rumors that Beckett’s the mother take off like wildfire in a town all too ready to believe the worst of her. And as the police investigation unfolds, she discovers that everyone has a secret to hide and the truth could alter everything she thought she knew.

I really liked Every Single Lie!  It was a book I read in one sitting, because I needed to know what was going on.

Beckett was a character I really felt for- losing her dad, finding a newborn baby in the locker room, issues with her ex…she had a lot going on in this book.  I just wanted to know what was going on, and it was interesting to see how everything unraveled.  There was a lot she needed to deal with, and any one of those things would be hard to deal with.  But all of them together?  Definitely not good.

People are terrible.  They really are.  Of course, people are going to think she’s the mom, and no amount of her saying she’s not is going to change their mind.  I did figure out who the mom was a little bit before the reveal, and it made so much sense, though it’s a journey getting there.

Back to terrible people, though.  People are so cruel to Beckett, even though, for the most part, they don’t say anything about it to her face.  It’s so unfortunate, but easier to be cruel behind someone’s back, or online.  Hopefully, she’ll be able to get far away from that town, because she deserves better than them.  But her family is there, so I’d understand why she would want to stay.  Who knows, maybe they’ll see her differently in a few years.  I doubt, because they seem pretty gossipy, but it’s possible.

One thing I thought was both strange and interesting was everything that happened with her dad.  It’s weird that people would be so terrible about the newborn in the gym, and say something to her face, but rumors of her dad never made their way to her?  I don’t get that at all, considering this is a gossipy, judgmental town.  I just have the hardest time believing she wouldn’t know the rumors about her dad until now, months after everything that happened with him, but everything they’re saying about this newborn and her get to her really fast.

Still, she has the support of her family and friends, and I’m glad she has them.  She tries to figure everything out herself, which I understand.  I feel like I might do that too, if I were her.  Hopefully, everything works out okay for Beckett, her family, and her friends.

This was a book worth reading, and I’m glad I read it!  I like Vincent’s books in general, and this book was another great book by her.

4 stars.  I really liked Every Single Lie, and I’m glad I picked this one up.