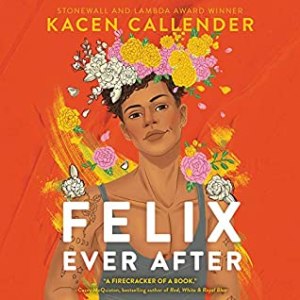 Book: Felix Ever After by Kacen Callender, Narrated by Logan Rozos

Published May 2020 by HarperAudio|Length: 8 hours, 24 minutes

FROM STONEWALL AND LAMBDA AWARD-WINNING AUTHOR KACEN CALLENDER COMES A REVELATORY YA NOVEL ABOUT A TRANSGENDER TEEN GRAPPLING WITH IDENTITY AND SELF-DISCOVERY WHILE FALLING IN LOVE FOR THE FIRST TIME.

Felix Love has never been in love – and, yes, he’s painfully aware of the irony. He desperately wants to know what it’s like and why it seems so easy for everyone but hime to find someone. What’s worse is that, even though he is proud of his identity, Felix also secretly fears that he’s one marginalization too many – Black, queer, and transgender – to ever get his own happily-ever-after.

When an anonymous student begins sending him transphobic messages – after publicly posting Felix’s deadname alongside images of him before he transitioned – Felix comes up with a plan for revenge. What he didn’t count on: his catfish scenario landing him in a quasi-love triangle…

But as he navigates his complicated feelings, Felix begins a journey of questioning a self-discovery that helps redefine his most important relationship: how he feels about himself. ‘FELIX EVER AFTER’ is an honest and layered story about identity, falling in love, and recognizing the love you deserve.

I really liked Felix Ever After!  I’m really glad I read it.

I really felt for Felix, and I hated that someone was so jealous of him that they shared a name and photos that they had no right to share.  I was so angry for him, and the person behind it had no right to do what they did.  I hate that his existence is considering flaunting, and I’m glad that person is no longer around.  All I’m going to say is that people are horrible.  Absolutely horrible.  It’s brutal, and hard to listen to, so please keep that in mind if you pick this book up.  But it’s important to not shy away from something just because it’s hard to listen to.  It’s a big part of Felix’s life in this book.

Even with the messages he was getting, Felix learned a lot about himself.  He learned to recognize that he has a father who loves him, no matter what.  Even though things aren’t easy for them, we see that money isn’t everything, and doesn’t make up for parents who don’t care about their kids, or that his parents didn’t disown him because he’s gay.  Yes, he sees some of his classmates as privileged, but that is definitely challenged as he learns more about them.  Things aren’t what they seem, and I liked seeing Felix see that.

I loved seeing Felix see that he deserves love and letting it into his life.  He’s a good kid, and I just want all of the happiness, joy and love in the world for him.  We all want love, but we also have to accept that we are worthy of it.  It’s not always an easy path, but I’m glad Felix found love.  He has such a great group of friends, and he has a lot of support, even though it was hard for him to accept for a long time.  Still, I’m glad he has some people in his corner.  He really needed it!

He’s not sure about his gender identity but takes the time to think and learn and question it.  He is comfortable and okay with who he is, even if he’s not always sure who he is.  Honestly, I just wanted to give Felix a hug.  I know it won’t make things better for him, and I know transphobia will always be a part of his life.  I know people are judgmental as hell, and not willing to looking part surfaces to who people really are.  Felix made a lot of decisions out of anger, fear and hurt, and that’s something I think I would have done as well.  He reaches out to others, though, and that’s a huge step because he realizes he’s not alone.  There are people going through something similar, and he has people he can lean on if he has questions or needs some support.

I love the cover!  It’s absolutely beautiful, and I really hope it’s one of Felix’s self-portraits.  If I could have that cover hanging on my wall, I absolutely would.

And Logan Rozos did a great job narrating.  I will say, since I did go for the audio book, it was sometimes hard to distinguish between Felix’s thoughts and his conversations with someone.  I’m sure it would have been a lot more clear if I read it in print (at least, I hope so), but it wasn’t something that was really clear when I was listening.  Still, it’s great on audio, and I really recommend this book, regardless of how you read it.

4 stars.  This is such a great book, and worth reading!