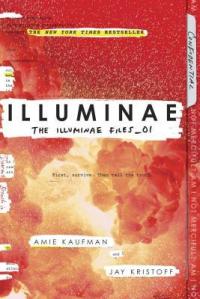 Kady thought breaking up with Ezra was the worst thing she’d ever been through. That was before her planet was invaded. Now, with enemy fire raining down on them, Kady and Ezra are forced to fight their way onto one of the evacuating craft, with an enemy warship in hot pursuit.

But the warship could be the least of their problems. A deadly plague has broken out and is mutating, with terrifying results; the fleet’s AI, which should be protecting them, may actually be their biggest threat; and nobody in charge will say what’s really going on. As Kady plunges into a web of data hacking to get to the truth, it’s clear only one person can help her bring it all to light: Ezra.

Told through a fascinating dossier of hacked documents—including emails, schematics, military files, IMs, medical reports, interviews, and more—Illuminae is the first book in a heart-stopping, high-octane trilogy about lives interrupted, the price of truth, and the courage of everyday heroes.

I really liked Illuminae and I’m glad I gave it another chance!  I tried reading it a few years ago, and had trouble getting through it because of the format.  I mostly gave it another chance because I had to read an epistolary novel of my choice for my final English essay, and of course, none of the books on the list given caught my interest.  I’m really glad we could pick a novel of our choice, and for some reason, I had my heart set on Illuminae.

I had an easier time with it this time around, and I don’t know if maybe I was in the mood for it, or if it was because I had to finish it in order to write my essay and do a video about it.

Random side note: based on the videos I watched (and I didn’t watch all of them), I was apparently the only one who didn’t pick a book from the list.

Back to the book, though.  I really liked it!  So much that I immediately bought Gemina and Obsidio, because I need to know what happens next.

It was interesting, because there are things we know that Kady doesn’t, and I was glad for her when she finds out that Ezra is alive.  I liked seeing all of the documents, and something I mentioned in both my essay and presentation was how the different documents came together to tell a much larger story, and how we were able to take a step back and see things more objectively because the type of documents used didn’t necessarily allow us to know what the characters were thinking at all times.

Kady’s interactions with Aidan really got to me though, and was easily the most beautifully written parts of the book.  I really loved Aidan, and I never would have expected that A.I. would be one of my favorite parts of the book!

I also liked how visual the book was!  Granted, trying to read some of the text was really frustrating because I had to turn the book into some really strange positions.  But we have Starry Night!  A heart!  Kady and Ezra together!  Kady by herself!  That was really cool to see.  So while some of the text placement was really frustrating to read, it also drew your attention to the page.  It is was like, what’s going on here?  What do they want us to draw our attention to?

This is a book that I think is best read in print, and it’s because of how visual it is.  I mean, you could go with the audio book, but I feel like you’re going to lose a lot by doing that.  I can’t begin to imagine the amount of work that went into designing each page, especially with all of the blueprints and schematics.  I commend not just Kaufman and Kristoff, but everyone who worked on the book for writing both a cool story and making it look really cool.

4 stars.  I didn’t love it, and I don’t know why, but I still really liked Illuminae.  I am really glad I gave it another chance!