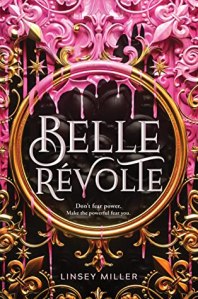 Emilie des Marais is more at home holding scalpels than embroidery needles and is desperate to escape her noble roots to serve her country as a physician. But society dictates a noble lady cannot perform such gruesome work.

Annette Boucher, overlooked and overworked by her family, wants more from life than her humble beginnings and is desperate to be trained in magic. So when a strange noble girl offers Annette the chance of a lifetime, she accepts.

Emilie and Annette swap lives—Annette attends finishing school as a noble lady to be trained in the ways of divination, while Emilie enrolls to be a physician’s assistant, using her natural magical talent to save lives.

But when their nation instigates a frivolous war, Emilie and Annette must work together to help the rebellion end a war that is based on lies.

I liked Belle Revolte!  I didn’t love it, but I really enjoyed it.

Emilie and Annette swap lives, and Annette gets to study magic, while Emilie get to be a physician’s assistant.  It was interesting to see them live a life different than their own.  Mostly, I loved that they got to do what they always wanted, though I hated that in their world, they had to switch places in order to do so.

For Annette in particular, things are really difficult for her, but I was glad to see that she got to study magic, and be in a place that allows her to be who she is.  I was glad that Emilie got to do the same, but I especially wanted it for Annette.  I hope, that after this book ends, they both get to do everything they dreamed of.

I wrongly assumed this was a series, so I was surprised to see that it was a stand-alone.  Don’t get me wrong, it’s nice to have a stand-alone fantasy, but because of that, things do get a little rushed.  As usual, I wanted to know more about the world.  I feel like a broken record with that, because I feel like I say that a lot with fantasy novels, but especially the stand-alone fantasy novels.  It was nice knowing that there isn’t a series I have to read just to find out more but at the same time, I think having at least one more book would help things not feel as rushed.

The book was a little slow at times, and I had a hard time getting into at first.  Things do pick up, and things get a little more fast-paced as the book goes on.  I know things need to be set up, and that can take a while, but for whatever reason, I had a hard time with this book at first.

I don’t usually mention covers, but I love the cover for this book!  It’s so pretty, and I love the colors.  Plus, it somehow fits with the book really well, even though nothing like it is described in the book.

3 stars.  I liked Belle Revolte, and I am interested to see what else Miller writes.