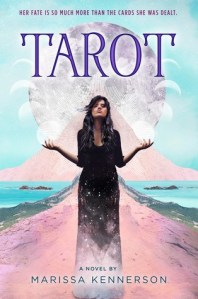 Anna was never supposed to exist. Born of a forbidden union between the Queen and the tyrannical King’s archnemesis, Anna is forced to live out her days isolated in the Tower, with only her mentors and friends the Hermit, the Fool, and the Magician to keep her company. To pass the time, Anna imagines unique worlds populated by creatives and dreamers—the exact opposite of the King’s land of fixed fates and rigid rules—and weaves them into four glorious tapestries.

But on the eve of her sixteenth birthday and her promised release from the Tower, Anna discovers her true lineage: She’s the daughter of Marco, a powerful magician, and the King is worried that his magical gifts are starting to surface in Anna. Fearing for her life, Anna flees the Tower and finds herself in Cups, a lush, tropical land full of all the adventure, free-spiritedness, and creativity she imagined while weaving.

Anna thinks she’s found paradise in this world of beachside parties, endless food and drink, and exhilarating romance. But when the fabric of Cups begins to unravel, Anna discovers that her tapestries are more than just decoration. They’re the foundation for a new world that she is destined to create—as long as the terrors from the old world don’t catch up with her first.

I am a little disappointed in Tarot.  I wanted to like it, but unfortunately, I didn’t like it as much as I thought I would.

I’m not really familiar with the different cards and their meanings, and I can’t help but wonder if that’s why things didn’t feel as developed as they could have.

Does it feel more developed if you’re really familiar with tarot?  If that’s the case, it is a little sad, because a lot of the world won’t feel completely developed for people like me, who don’t have a lot of familiarity with it.  I’m really hoping that’s not the case, because the book was pretty short, so it’s not like a lot of time could have been devoted to explaining the world a little more.  I like the world enough that I’m hoping it’s because of the length of the book.

It’s interesting that Kennerson didn’t give them another name, and that they were the Fool or the Magician the whole time.  It was hard to care about them, because I felt like they were just an image from a card, and weren’t important enough to have any other names.

Anna wasn’t memorable either, which is disappointing for the main character.  Other than being locked away in a tower for her whole life before escaping to Cups, I couldn’t tell you much about her.  I’m glad she got out and was able to experience life outside a tower.  I liked seeing her experience things for the first time, but it also made me really sad for her.  Other than that, though, I didn’t really know a lot about her.

1 star.  I liked that the world and characters came from tarot cards but I wanted more from the book.