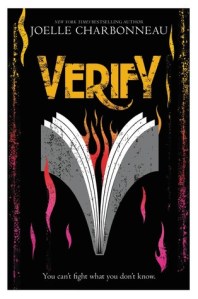 Meri Beckley lives in a world without lies. When she turns on the news, she hears only the facts. When she swipes the pages of her online textbooks, she reads only the truth. When she looks at the peaceful Chicago streets, she feels the pride everyone in the country feels about the era of unprecedented hope and prosperity over which the government presides.

But when Meri’s mother is killed, Meri suddenly has questions that no one else seems to be asking. And when she tries to uncover her mother’s state of mind in her last weeks, she finds herself drawn into a secret world full of facts she’s never heard and a history she didn’t know existed.

Suddenly, Meri is faced with a choice between accepting the “truth” she has been taught or embracing a world the government doesn’t want anyone to see—a world where words have the power to change the course of a country, and the wrong word can get Meri killed.

I didn’t like Verify at all!  Don’t get me wrong, the idea is cool, and as a reader, I loved the message that words are powerful, but the story didn’t work for me.

I wasn’t particularly interested in Meri, or what happened to her.  She seemed to come around to rebellion pretty fast, even though she really struggled with it.  I wish she had struggled with a little bit more, because it felt really rushed and fast.

It also felt like it happened over the period of a few days, and if that’s the case, she went from knowing absolutely nothing about this group to being the leader of a revolution in a matter of days.  I really wish it were more clear the period of time in which this book is taking place.

I had no sense of the timeline, and when this book was supposed to be taking place.  It seems to be taking place decades later, but it was not clear how far in the future we were.  It also wasn’t clear how we got to the point that they were able to erase words to the point that no one knows how they’re pronounced, and all in the span of a few decades?  How were they able to change history that quickly, especially because there are going to be people who remember words like verify?  Something about that didn’t sit quite right with me.

Clearly, anything having to do with time didn’t make sense to me.  I feel like I didn’t miss anything as far as that goes, but I feel like a lot more could have been explained in this book.

Also…how is there no bookish black market in this world?  Like, I love the Great Library series by Rachel Caine, where the Library Of Alexandria is around and in control of all books and knowledge.  There’s a black market and burners, and it’s just so weird to me that people were so willing to give up prized editions of books instead of said books circulating some sort of black market.

I know there’s this group hiding things like The Federalist papers, and it’s possible there are other groups doing the same thing, to varying degrees of success.  But no black market for books?  Really?  I find that a little disappointing.

And the revolution Meri finds herself in charge of?  It was really thrown together, and it’s no wonder it didn’t seem to work.  It felt like they wanted to do something but didn’t want to put a lot of effort or thought into it, and just went with the first thing that came to mind.

I really feel like I can’t make sense of this world.  I am having a hard time getting over that, because it didn’t feel like it was put together very well.  Or at least, in a way that got me interested.  I feel like my review is all over the place…much like this book, so I think I’ll wrap it up with my rating.

1 star.  This definitely wasn’t the book for me, though I liked some of the ideas in it.