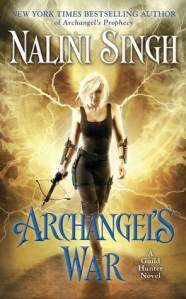 The world is in chaos as the power surge of the Cascade rises to a devastating crescendo. In furiously resisting its attempts to turn Elena into a vessel for Raphael’s power, Elena and her archangel are irrevocably changed. . .far beyond the prophecy of a cursed Ancient.

At the same time, violent and eerie events around the world threaten to wipe out entire populations. And in the Archangel Lijuan’s former territory, an unnatural fog weaves through the land, leaving only a bone-chilling silence in its wake. Soon it becomes clear that even the archangels are not immune to this deadly evil. This time, even the combined power of the Cadre may not be enough. . .

This war could end them all.

I really liked Archangel’s War!  I’ve been really into this series, and I caught up in time to read this book.

I loved seeing what was going on, and how everything went with Lijuan.  If there’s someone who won’t die, it’s the Goddess Of Death.  Her abilities were terrible but also amazing, and she went to great lengths to gain more power- enough to take over the world.  That was definitely her goal, and I was glad that it didn’t happen.

After finishing the last book, I was wondering what would happen to Elena and Raphael.  They’re okay, and all of our favorites are okay too.  I know there were some questions they had- and I had them too- but I’m glad they were answered, and were able to figure it out to defeat Lijuan.  She’s definitely the big bad in this series, and I was wondering not only what had happened to her, but how they’d take her down.

Back to Raphael and Elena- things were definitely different for both them, and for pretty much the entire book.  Everything that we saw happen to Elena were still very present in this book, but things did get righted at the end of the book.  I was glad to see that because being an angel was very much a part of Elena.  Especially with what happened to her wings.

I really liked seeing what was going on with the Ancients- and the ancients that are Calienne and Alexander, but those who were Ancient beyond words.  They didn’t realize how bad things were, and how hard it would be to defeat Lijuan, but they were all able to work together, even though they might now have wanted to.

This book was action-packed, and it was definitely hard to put down.  We follow several characters, and quite a few pop in and out.  It was great to see everyone again but I wished we had gotten to spend a little more time with all of them.  It felt like non-stop action from start to finish, and I think this series ended on a great note.  I wonder if there’s going to be a spin-off of some sort.  I know her Psy-Changeling series had another series, and I wonder if that’s in store for this one as well.  With how it ended, and with the world Singh built, I think there’s a lot more story she could tell in this world.

4 stars.  I really liked Archangel’s War, and it’s a great way to end a really cool and interesting series.