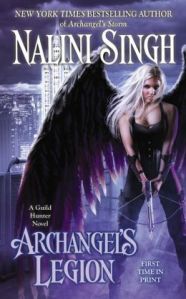 Angels are falling from the sky in New York, struck down by a vicious, unknown force.

Vampires are dying impossibly of disease.

Guild hunter Elena Deveraux and the Archangel Raphael must discover the source of the wave of death before it engulfs their city and their people, leaving New York a ruin and Raphael’s Tower under siege by enemy archangels.

Yet even as they fight desperately to save the city, an even darker force is stirring, its chill eyes trained on New York…and on Raphael. Rivers of crimson and nightmares given flesh, the world will never again be the same…

I really liked Archangel’s Legion!  I definitely liked it a lot more than the last couple of books, and I’m glad we got back to Elena and Raphael.

It’s not that I don’t like reading about the other characters, because I do.  But we started with Elena and Raphael, and I’m glad their story has continued.  I just love them as a couple and they balance each other out really, really well.

There’s a lot going on with this book, and I feel like this is going to be the turning point in the series.  With a Tower that’s under siege, and the archangel’s getting more powerful, things are getting really interesting.  The world’s changing, and the Cascade is pretty much the reason for that.  I wish we knew a little bit more about it, but maybe that will come up in the books to come.

That’s what I’m hoping, anyway.  I mean, I’m sure we’ll see how much things change, and if alliances are formed between all of the arachangels, and how the divides that will form.  I’m assuming all of the archangels will be pitted against each other, but maybe they’ll all unite against one really bad force.  It’s hard to say, at least right now, but I’ll find out once I keep reading.

There’s a major battle- against Liujan, of course- and I have the feeling it’s far from over.  Things have taken a turn for the worse, and things are going to get a lot worse before they start to get better.  It’s romance, so of course everything is going to end happily ever after…at least eventually.

This world is a lot more cruel and cold, so maybe not, but you never know.  Still, I’m pretty hopeful things are going to be fine in the end.  It just might take a while to get there.

4 stars.  I really liked the story, and I’m glad we’re back to Elena and Raphael!  Hopefully, we’ll stay with them for a while but with things going the way they are, I have the feeling we’ll be seeing a lot of other characters.  It’s not going to stop me from reading on to see what happens.