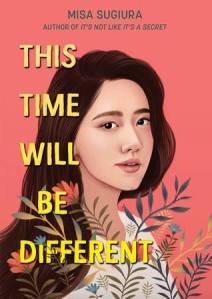 Book: This Time Will Be Different by Misa Sugiura

Katsuyamas never quit—but seventeen-year-old CJ doesn’t even know where to start. She’s never lived up to her mom’s type A ambition, and she’s perfectly happy just helping her aunt, Hannah, at their family’s flower shop.

She doesn’t buy into Hannah’s romantic ideas about flowers and their hidden meanings, but when it comes to arranging the perfect bouquet, CJ discovers a knack she never knew she had. A skill she might even be proud of.

Then her mom decides to sell the shop—to the family who swindled CJ’s grandparents when thousands of Japanese Americans were sent to internment camps during WWII. Soon a rift threatens to splinter CJ’s family, friends, and their entire Northern California community; and for the first time, CJ has found something she wants to fight for.

I didn’t like This Time Is Different as much I thought I would, but I still liked it.

CJ was interesting, and I love that she’s into flower arranging.  I feel like that’s not something a lot of people are into, and that definitely stood out.  She really was happy helping out at the family flower shop, and it was really important to both CJ and Hannah.  I didn’t love her, but I can’t really figure out why.  She was really hard on people, and not willing to give them second chances.  Which is understandable but she let it get in the way of other things.

Fighting for the flower shop, and changing the name of the school was really important to her, and it was interesting to see her fight for that.  There are issues along the way, including working with someone she doesn’t like.  Which I completely understand, after hearing what had happened.  But it was middle school, and I want to give her the benefit of the doubt..maybe she has changed.

I felt like I learned a little bit more about Japanese internment and the effects it had.  It’s not something I really remember from history class in school, but it had this huge affect on CJ’s town, even decades later.  It very much affected her family, and it became really important to her to fight for her community.

The characters in This Time Will Be Different are very human and very flawed.  I liked that because they felt so very real.  They have a lot of really difficult conversations, and there aren’t easy answers but I think a lot of the characters learn a lot about themselves along the way.

3 stars.  I liked This Time Will Be Different but I didn’t love it.