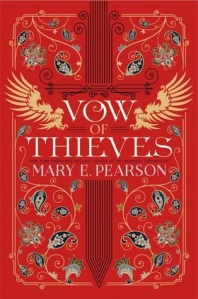 Kazi and Jase have survived, stronger and more in love than ever. Their new life now lies before them―the Ballengers will be outlaws no longer, Tor’s Watch will be a kingdom, and the two of them will meet all challenges side by side, together at last.

But an ominous warning mars their journey back, and in their rush to return to Tor’s Watch, just outside the fortress walls, they are violently attacked and torn apart―and each is thrust into their own new hell.

Unsure whether the other is alive or dead, Kazi and Jase must keep their wits among their greatest enemies and unlikeliest allies. And all the while, Death watches and waits.

I really liked Vow Of Thieves!  I was really excited to get an ARC of it, and I liked it just as much as I thought I would.

I thought the story was great in this book.  I liked seeing what was going on with Kazi and Jase, and things were not easy for them in this book.  I wanted them to be okay, and there were times, especially at the beginning, where I thought things wouldn’t be okay.  Things turned out just fine, of course, and I’m glad it did.  They really deserve it after everything they’ve been through.

I really liked Kazi in this book and she’s such an amazing character.  She had some tough decisions to make, and I thought she handled things the best way she could.

As for Jase…I did like him a little bit more in this book than I did in the previous book.  He’s really trying to keep his family together and to protect his people.  I wanted him to be okay, but with everything that happens, it wasn’t easy for him.  Still, he was able to make his way back to his home and family, and with Kazi, they were able to do what they needed to do in order to get Tor’s Watch back to what it was before the attack.

I thought things were wrapped up really well.  I was wondering where the story was going to go, and we definitely found out in this book.  I’m sad it’s only a duology, because I really wanted more of this story and this world.  Even though things are wrapped up and this particular story is over, there’s room for a lot more story in this world.  With how the book ended, it makes me wonder what else is on the horizon.

Things may have been resolved in this book, but there’s a lot more that can happen.  I hope it doesn’t, but you never know.  I know I’ll be waiting to see if we’ll be getting more books in this world, and who it might focus on.  It is a great end to the series, and it was definitely a page-turner.

Like the previous book, it took a little bit to get into the book, but once I did, it was hard to stop reading.  This series, and the Remnant Chronicles, are worth reading.

4 stars.  I really liked Vow Of Thieves, and it’s a great end to a great series.