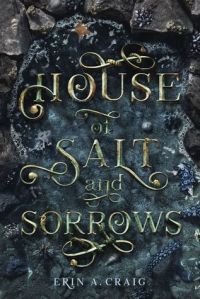 Book: House Of Salt And Sorrows by Erin A Craig

Expected Publication is August 6, 2019 by Delacorte|Expected Number Of Pages: 416

Where I Got It: I received an e-ARC from netgalley.com in exchange for a fair and honest review.  All thoughts and opinions are my own

In a manor by the sea, twelve sisters are cursed.

Annaleigh lives a sheltered life at Highmoor, a manor by the sea, with her sisters, their father, and stepmother. Once they were twelve, but loneliness fills the grand halls now that four of the girls’ lives have been cut short. Each death was more tragic than the last—the plague, a plummeting fall, a drowning, a slippery plunge—and there are whispers throughout the surrounding villages that the family is cursed by the gods.

Disturbed by a series of ghostly visions, Annaleigh becomes increasingly suspicious that the deaths were no accidents. Her sisters have been sneaking out every night to attend glittering balls, dancing until dawn in silk gowns and shimmering slippers, and Annaleigh isn’t sure whether to try to stop them or to join their forbidden trysts. Because who—or what—are they really dancing with?

When Annaleigh’s involvement with a mysterious stranger who has secrets of his own intensifies, it’s a race to unravel the darkness that has fallen over her family—before it claims her next.

I liked House Of Salt And Sorrows!  Not as much as I thought I would but I still liked it.

It very much reminded me of the tale of the 12 Dancing Princesses.  I don’t know if it’s a re-telling of that story, because I couldn’t find actual confirmation that this is the case.  Either way, I liked that they were cursed, and the reason behind what was happening to Annaleigh’s sisters was interesting.

I don’t know how I feel about Annaleigh.  She seems to be the only one who knows what’s going on, which doesn’t surprise me.  Considering how things go, and what’s really going on, it’s not surprising.  I hope things work out for Annaleigh and her sisters, and it seems like things end in a pretty good place for them.  Hopefully, nothing horrible happens to them, and they can all live happily ever after.

I wish we got more with her sisters, but with so many of them, it’s not a surprise.  You get a pretty good sense of the world they’re living in, and how suffocating it is to be in mourning all the time.  You see what people think of them, and how hard it is for them to move past it and move on with their lives.

The setting is pretty haunting and very gothic.  I mentioned how suffocating it was for them.  You definitely feel all of that throughout the book, and how hard it was for Annaleigh when her father decided days after another funeral that they were no longer going to be in mourning.

I’m not sure what else to say about House Of Salt And Sorrows.  I liked the world and the setting but I wasn’t in love with the characters.

3 stars.  I liked House Of Salt And Sorrows but I didn’t love it.