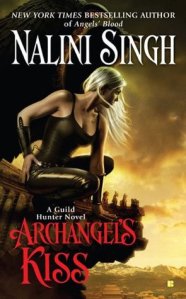 Vampire hunter Elena Deveraux wakes from a year-long coma to find that she has become an angel-and that her lover, the stunningly dangerous archangel Raphael, likes having her under his control. But almost immediately, Raphael must ready Elena for a flight to Beijing, to attend a ball thrown by the archangel Lijuan. Ancient and without conscience, Lijuan’s power lies with the dead. And she has organized the most perfect and most vicious of welcomes for Elena…

I liked Archangel’s Kiss!  I don’t know if I like this series as much as her Psy-Changeling series but I’m only a couple books in, so maybe I’ll have a better idea once I read more of this series.

This book picks up after Elena wakes up from a coma to find that she’s become an angel.  I liked seeing Elena deal with becoming an angel, and getting ready for a ball thrown by Lijuan.  She has a lot to learn about being an angel, and this book deals with that.  It’ll be interesting to see what else is in store for Elena, and if it’ll affect her Hunter abilities.  We see a little bit of it in this book, and I’m curious to see how all of that will work out in the future.  It could be an interesting combination.

I also thought that everything with Lijuan was interesting.  So far, it seems like the books are focusing on the other archangels.  The first book focused on Uram, and Lijuan is pretty important in this one.  It makes me wonder if each of the archangels are going to have an important part to play in the rest of the series.  The cadre does seem to be dropping like flies, and I wonder how long that can be kept up.

We meet a lot of characters and I honestly can’t remember most of them.  Hopefully, we’ll get to see of them, and I’ll actually be able to remember them.  But I also wish we hadn’t met so many of them in this book.  It felt like too many were introduced.  Hopefully this won’t continue, but maybe she’ll start doing a list of characters, like she did with her Psy-Changeling series.

I do like Elena and Raphael, and I do like them together.  I like that it’s not immediate and that things are moving relatively slow.  At least in terms of romance novel land.  There are definitely going to be a lot of adjustments in their future, that’s for sure.

3 stars.  I liked it, and I can’t wait to see where things are headed next.