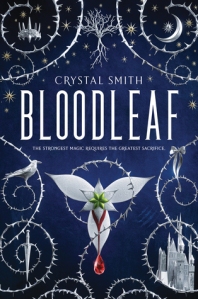 Princess Aurelia is a prisoner to her crown and the heir that nobody wants. Surrounded by spirits and banned from using her blood-magic, Aurelia flees her country after a devastating assassination attempt. To escape her fate, Aurelia disguises herself as a commoner in a new land and discovers a happiness her crown has never allowed. As she forges new bonds and perfects her magic, she begins to fall for a man who is forbidden to rule beside her. But the ghosts that haunt Aurelia refuse to abandon her, and she finds herself succumbing to their call as they expose a nefarious plot that only she can defeat. Will she be forced to choose between the weight of the crown and the freedom of her new life?

I loved Bloodleaf!  I loved the world and the characters, and it’s really great YA fantasy!

Aurelia was a great character.  She worked so hard to hide her magic, and I loved the reason why she was able to do it.  She’s in a world that executes people like her, and I was glad she was able to leave.  She’s quirky, but she has a really good heart.  She changed a lot over the course of the book, and she went through a lot.  Things weren’t easy, but I liked her determination to get through it.

I also liked Zan, and while we don’t get enough of him, in my opinion, I still really liked what we saw.  I don’t have as much to say about him as I do Aurelia, but I really like him.  And I really like them together.  I didn’t mind the romance at all, and it felt really natural.

I loved the world and the stories.  The magic was interesting, and I wish we saw more of it, and more of what it could do.  Since Aurelia was still trying to gain control, we learned a lot but I also feel like there’s more to it.  I feel like we’ve barely touched what the magic in her world can do.

I loved the ending, and it had me sobbing.  It really made me wish we saw more of Aurelia’s mom.  It felt a little random, and it was definitely out of the blue, but that didn’t stop me from crying.  I think it would have had a lot more to it had we known her mom a little better.

One thing I’m wondering is what other stories are left to tell in this world.  It’s the first book in the series, and I’m wondering how this story is going to continue because everything was wrapped up really well.  I don’t usually say this with fantasy, especially with YA fantasy, but it would have worked really well as a stand-alone.  The story is so contained that I’m honestly not sure where we’re headed after this.  Don’t get me wrong, I loved this book, and I’m definitely going to read the next book.  I just wish I had more of an idea of where it was headed.

5 stars.  I loved Bloodleaf and thought the world and mythology was really unique.