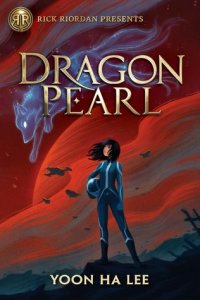 To keep the family safe, Min’s mother insists that none of them use any fox-magic, such as Charm or shape-shifting. They must appear human at all times. Min feels hemmed in by the household rules and resents the endless chores, the cousins who crowd her, and the aunties who judge her. She would like nothing more than to escape Jinju, her neglected, dust-ridden, and impoverished planet. She’s counting the days until she can follow her older brother, Jun, into the Space Forces and see more of the Thousand Worlds.

When word arrives that Jun is suspected of leaving his post to go in search of the Dragon Pearl, Min knows that something is wrong. Jun would never desert his battle cruiser, even for a mystical object rumored to have tremendous power. She decides to run away to find him and clear his name.

Min’s quest will have her meeting gamblers, pirates, and vengeful ghosts. It will involve deception, lies, and sabotage. She will be forced to use more fox-magic than ever before, and to rely on all of her cleverness and bravery. The outcome may not be what she had hoped, but it has the potential to exceed her wildest dreams.

I liked Dragon Pearl!  Not as much as I wanted to, but I still liked it!

What I liked most is that it’s a sci-fi re-telling of Korean mythology and folklore.  I love re-tellings but they tend to be fantasy or contemporary, and it’s pretty rare that they’re sci-fi so that made this book stand out.  Min travels all over space, and there are pirates and ghosts involved, and you can’t go wrong with pirates or ghosts.  It’s too bad there are no pirate ghosts, but that is definitely not this story.

I liked Min, and how she wanted to follow in her brother’s footsteps and be a part of the Space Forces.  That definitely changes over the course of the book, and I liked seeing her work her way out of some of the sticky situations she finds herself in.  I was most intrigued by the fox-magic, and how people saw it as a bad thing.  I guess it had to be someone, but I liked seeing her rely on her magic more and more to find out what happened to her brother.

I was surprised by what really happened, and it just goes to show you can’t always place your trust in the people.  She meets a lot of people along the way, and things are never what they seem.

There were times (especially at the beginning), where things seem to drag.  It does take time for Min to get into space, but she has a lot of adventures along the way, and even though I didn’t love it, I can see why so many people do.  I had a hard time getting into it, but I still enjoyed the characters and the world.  Especially everything involving the Dragon Pearl.

3 stars.  I liked Dragon Pearl, and it was fun to see a re-telling set in space.