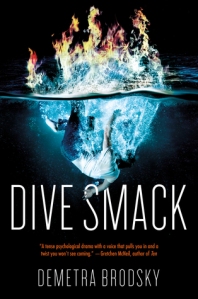 Theo Mackey only remembers one thing for certain about the fire that destroyed his home: he lit the match.

Sure, it was an accident. But the blaze killed his mom and set his dad on a path to self-destruction. Everything else about that fateful night is full of gaping holes in Theo’s mind, for good reason. Maybe it’s better that way. As captain of the Ellis Hollow Diving Team, with straight A’s and solid friends, he’s only one semester away from securing a scholarship, and leaving his past behind.

But when a family history project gets assigned at school, new memories come rushing to the surface, memories that make him question what he really knows about his family, the night of the fire, and if he can trust anyone—including himself.

I’ve heard a lot about this book, so I decided to pick it to see what the fuss was about.  Dive Smack ended up being an okay read for me, but I get why people like it so much.

Let’s start off with what I liked about Dive Smack!  I really liked the diving terms at the start of each chapter, and how they related to what was going on in Theo’s life and with that particular chapter.  I loved that he was a diver, and I feel like diving (or swimming) isn’t something a lot of YA characters do.  That really stood out to me, and seeing how each term related to what was going on was really cool.

I also liked seeing the mystery of the night of the fire unravel.  We’re learning things as they happen, the same way Theo does.  His memories start coming back, and it was interesting to see how everything worked out.

As much as I liked seeing the mystery unravel, I thought most of the book moved too slow.  It wasn’t until we were close to the end that things started to pick up, and even though I liked the mystery, there wasn’t any excitement in the build-up.  I never really felt a sense of urgency when I was reading it.

And then there’s the fact that Theo’s grandpa didn’t share his concerns about Theo’s uncle Phil.  Especially given everything that happened with Phil.  I get he’s trying to protect Theo, but I wonder if things could have been avoided if grandpa had just been honest about what happened.  I get they were both struggling with what happened, and Theo’s school project brought that up, but I really do wonder if things would have unfolded the way they did if his grandpa had just been honest with him.

I liked Chip and Iris, though.  I really liked learning about Iris, and she had a pretty interesting story.  Theo’s lucky to have Chip around, and Chip seems like a cool guy.  They’re really the only other characters worth talking about, but I don’t have much to say about them.

2 stars.  I wanted to like Dive Smack more, but the pacing was really slow and I never felt any sense of urgency.