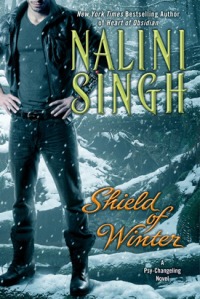 Assassin. Soldier. Arrow. That is who Vasic is, who he will always be. His soul drenched in blood, his conscience heavy with the weight of all he’s done, he exists in the shadows, far from the hope his people can almost touch—if only they do not first drown in the murderous insanity of a lethal contagion. To stop the wave of death, Vasic must complete the simplest and most difficult mission of his life.

For if the Psy race is to survive, the empaths must wake…

Having rebuilt her life after medical “treatment” that violated her mind and sought to stifle her abilities, Ivy should have run from the black-clad Arrow with eyes of winter frost. But Ivy Jane has never done what she should. Now, she’ll fight for her people, and for this Arrow who stands as her living shield, yet believes he is beyond redemption. But as the world turns to screaming crimson, even Ivy’s fierce will may not be enough to save Vasic from the cold darkness…

I really liked this one!  We finally get Vasic’s book, which was nice.  I was wondering if we’d ever get his book, and I’m glad we did!

I’m curious to see what is next for the Arrows, particularly with Silence falling.  I mean, protecting Silence is their main goal, so I’m wondering if we’ll at least get a glimpse of what their goals are now that things are changing.  It kind of seems like their future is linked with the Empaths, and I wasn’t expecting them to have such a big role in this book.

It makes sense that Empaths are really important to the future of the Psy, so I’m hoping we’ll get more of them as well.  I think Slave To Sensation is the last book that had such an emphasis on Empaths, and I really felt like a lot of this series was building up to both Heart Of Obsidian and Shields Of Winter.  We start to see what a post-Silence world looks like, and with a couple of books left in the series, I’m curious to see how things get wrapped up.  I now things are far from being resolved, and I really do want to know what else is going to go wrong before it gets better.

I like Vasic and Ivy, and I do like them together, but…something about their relationship seemed a little cold to me.  I know Silence is really important for Vasic as an Arrow, and he’s seemed pretty cold whenever he’s popped up in the series before this point.  Maybe it’s just me, but I expected more angst and tortured hero from Vasic.  Considering all of the things he’s had to do, I figured there would be more angst as far as his relationship with Ivy goes.  He’s an Arrow, and she’s an Empath, and I figured there would be more conflict with that, but there wasn’t really enough of it, at least for me.

Maybe I was expecting something like the romance we saw in Slave To Sensation or Caressed By Ice, and that’s why I wasn’t into the romance.  I wish I liked them more together, because I do like them together, and I think they’re a great couple.  I just didn’t love them.

4 stars. I really liked Shield Of Winter, and I’m really curious to see who will be paired together in the next book.  And how the series is going to end.