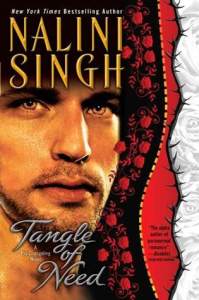 Adria, wolf changeling and resilient soldier, has made a break with the past—one as unpredictable in love as it was in war. Now comes a new territory, and a devastating new complication: Riaz, a SnowDancer lieutenant already sworn to a desperate woman who belongs to another.

For Riaz, the primal attraction he feels for Adria is a staggering betrayal. For Adria, his dangerous lone-wolf appeal is beyond sexual. It consumes her. It terrifies her. It threatens to undermine everything she has built of her new life. But fighting their wild compulsion toward one another proves a losing battle.

Their coming together is an inferno…and a melding of two wounded souls who promise each other no commitment, no ties, no bonds. Only pleasure. Too late, they realize that they have more to lose than they ever imagined. Drawn into a cataclysmic Psy war that may alter the fate of the world itself, they must make a decision that might just break them both.

I found myself bored with both Adria and Riaz, and I think they’re one of my least favorite couples, if not my least favorite.  I think the fact that he had a mate didn’t help, though it seemed like he really did choose Adria, and that part I did like.  But otherwise, I just had a hard time rooting for them as a couple and I didn’t particularly care about their story.

As far as Kaleb goes…I’m wondering what he’s up to.  Clearly, finding someone, and I want to know who it is.  I’m sure all will be revealed soon, and I’m hoping it’s not a disappointment or letdown when we get there.  As for the Ghost, I’m hoping it’s the same as well.  I really hope it’s soon.  It will probably will be, since we only have a few books to go.

I’m not sure what else to say about Tangle Of Need, but I think I will finish with the thought that it’s very much about the aftermath of Kiss Of Snow.  It wrapped up a lot of things we saw in that book, and I’m curious to see where things will go.

2 stars.  As much as it pains me to give this book 2 stars, it really was okay for me.  Still, I think it wraps up a lot of things from the previous book, and it hints at some things I’m sure will come up in the rest of the series.