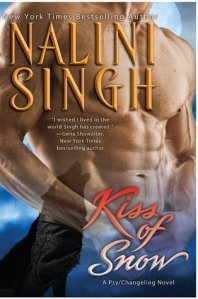 Since the moment of her defection from the PsyNet and into the SnowDancer wolf pack, Sienna Lauren has had one weakness. Hawke. Alpha and dangerous, he compels her to madness.

Hawke is used to walking alone, having lost the woman who would’ve been his mate long ago. But Sienna fascinates the primal heart of him, even as he tells himself she is far too young to handle the wild fury of the wolf.

Then Sienna changes the rules-and suddenly, there is no more distance, only the most intimate of battles between two people who were never meant to meet. Yet as they strip away each other’s secrets in a storm of raw emotion, they must also ready themselves for a far more vicious fight…

A deadly enemy is out to destroy SnowDancer, striking at everything they hold dear, but it is Sienna’s darkest secret that may yet savage the pack that is her home-and the alpha who is its heartbeat.

This is one of my favorite couples in the series!  I’m glad we finally got to see Sienna and Hawke, and I feel like some of the last few books were leading up to this one.  It was only a matter of time before we got Sienna and Hawke’s story, and I’m glad we did!

That’s the thing, though.  I wanted to know more about Sienna’s ability.  So, we do get the basic idea of what she can do, and what she was trained to do as a child.  But…I don’t know.  I know what she can do is really rare, and to be as strong and powerful as Sienna is is even more rare.  I just wish it was explained a little bit better, because for me, it wasn’t completely clear what she could do.  I’m hoping we’ll learn more about it in the books to come.

Something I really liked was seeing that the Psy (at least, some of them) are more of a threat than I originally thought.  There’s been a lot going on, and I knew things would not go well, but for some reason, I didn’t think they’d be a huge threat.  I certainly wasn’t expecting what actually happened in this book, but it did make things more interesting.  The stakes keep getting higher and higher, and while I’ve always been curious to see how things are going to end, things are really starting to come together.  It’ll be interesting to see how she wraps things up.

4 stars.  I really liked this one, and I can’t wait to see what happens next.  Also, I loved Sienna and Hawke, and I’m glad they finally got their book!