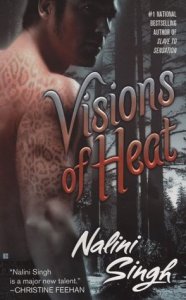 Hailed as a major new talent in paranormal romance, Nalini Singh takes us deeper into the world of the Psy and the changelings in her latest extraordinary novel, where a gifted woman sees passion in her future – a passion that is absolutely forbidden by her kind…

Used to cold silence, Faith NightStar is suddenly being tormented by dark visions of blood and murder. A bad sign for anyone, but worse for Faith, an F-Psy with the highly sought after ability to predict the future. Then the visions show her something even more dangerous – aching need…exquisite pleasure. But so powerful is her sight, so fragile the state of her mind, that the very emotions she yearns to embrace could be the end of her.

Changeling Vaughn D’Angelo can take the form of either man or jaguar, but it is his animal side that is overwhelmingly drawn to Faith. The jaguar’s instinct is to claim this woman it finds so utterly fascinating and the man has no argument. But while Vaughn craves sensation and hungers to pleasure Faith in every way, desire is a danger that could snap the last threads of her sanity. And there are Psy who need Faith’s sight for their own purposes. They must keep her silenced – and keep her from Vaughn.

I really liked Visions Of Heat!  I especially liked Faith and Vaughn together.  Thought Sasha and Lucas from the previous book aren’t the focus, I do like that we see them in this book, and that we still get their story, even though they aren’t the main couple in this book.

I really like the world, and I’m intrigued with the F-Psy and how isolated they are.  She lives in her own little bubble and I thought it was interesting that she decided to try to get out of it and break free.  I particularly liked seeing Faith outside of the compound she’s lived in for years, and how she begins to adjust to the outside world.

We get more of this world we saw in Slave To Sensation, and I’m curious to see if we’ll see some of the other packs and Psy in the other books.  I’m sure each book will focus on a different couple, if this book and the one before it are any indication.  She really built on the world, and though you don’t need to read the first one to understand what’s going on in this one, I still think the world and characters are good enough that you’ll want to read each one in order!

It did seem more political than Slave To Sensation- Faith is a possibility for an opening on the Council, and it’s pretty much for the control they’d have over her, and because of what she can do.  I think that’s why it’s so interesting that those with abilities like Faith are so isolated.  I mean, they do seem to train them to see certain things, but it’s interesting that they don’t try to control them more.  I don’t know if we’ll see more of the F-Psy in future books (or that we’ll see one as powerful as Faith is supposed to be), but I am curious to learn more about what they can do.

I did like her dad, and he seemed pretty cool, all things considered.  He did seem to care about her, which seemed unexpected, considering how cold and emotionless the Psy are supposed to be.  Maybe they’re not all alike after all.

We do see more of the Silence Protocol, and the NetMind, and I hope we’ll continue to see more of it in the books to come.  I’m sure we will, and while I’m fairly certain each book is going to focus on a different couple, I’m sure we’ll see appearances from Faith, Vaughn, Lucas and Sascha.  I’m very curious to see if the Psy will rebel and change how things are done.

4 stars.  I really liked Visions Of Heat, and I can’t wait to start reading the next one!