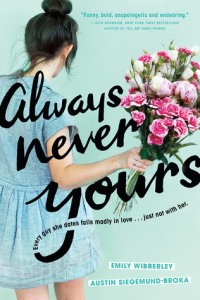 Book: Always Never Yours by Emily Wibberley and Austin Siegemund-Broka

Megan Harper is the girl before. All her exes find their one true love right after dating her. It’s not a curse or anything, it’s just the way things are, and Megan refuses to waste time feeling sorry for herself. Instead, she focuses on pursuing her next fling, directing theatre, and fulfilling her dream school’s acting requirement in the smallest role possible.

But her plans quickly crumble when she’s cast as none other than Juliet–yes, that Juliet–in her high school’s production. It’s a nightmare. No–a disaster. Megan’s not an actress and she’s certainly not a Juliet. Then she meets Owen Okita, an aspiring playwright who agrees to help Megan catch the eye of a sexy stagehand in exchange for help writing his new script.

Between rehearsals and contending with her divided family, Megan begins to notice Owen–thoughtful, unconventional, and utterly unlike her exes, and wonders: shouldn’t a girl get to play the lead in her own love story?

Always Never Yours is a really cute book!  I liked it and if you’re looking for a cute romance, I think this would be a great book to read.

I really liked the concept behind the book- a girl who dates guys, only for them to find the love of their life after they break up with her.  It’s definitely different than what I’ve seen before, and it seems like she has a reputation as a flirt.  I certainly liked that she seemed to be okay with it, and didn’t feel any shame in it.

I thought it was interesting and different (in a good way) that Megan dreaded acting, and was only in the play to fulfill a requirement to get into her dream college.  I think I had assumed that if you’re in theater, you wanted to be an actor.  Which is stupid, because there’s a lot more to theater than acting.  There’s all of the behind-the-scenes stuff as well, and I kind of liked that she didn’t really have any interest in acting

Of course, it’s not a YA contemporary unless she learns something about herself, and over the course of the book, she does learn a lot about herself.  I can’t say I’m a fan of Megan’s best friend, but her friend does seem to realize she did something wrong, and did seem really sorry about what had happened.  I also liked her relationships with her family, and I can definitely understand why she felt the way she did.

I’m not the biggest fan of Shakespeare, and I think that might be why I didn’t love the book.  At least one reason, anyway. But I think it’s the main reason.  I did like it as a backdrop for Megan’s story, though.  And I didn’t get a Shakespeare re-told vibe from the book, but I think if you like Shakespeare, YA and romance, this book is for you!