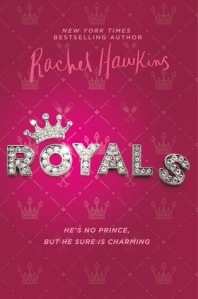 Meet Daisy Winters. She’s an offbeat sixteen-year-old Floridian with mermaid-red hair; a part time job at a bootleg Walmart, and a perfect older sister who’s nearly engaged to the Crown Prince of Scotland. Daisy has no desire to live in the spotlight, but relentless tabloid attention forces her to join Ellie at the relative seclusion of the castle across the pond.

While the dashing young Miles has been appointed to teach Daisy the ropes of being regal, the prince’s roguish younger brother kicks up scandal wherever he goes, and tries his best to take Daisy along for the ride. The crown–and the intriguing Miles–might be trying to make Daisy into a lady . . . but Daisy may just rewrite the royal rulebook to suit herself.

I liked this one!  Her books are always fun and light-hearted, and Royals was no exception.  It reminded me of The Princess Diaries, but in an alternate universe Scotland, and the main character is the sister of the future princess of Scotland (by way of marriage).  I was also reminded (at least a little) of Princess Kate and Prince William (and Harry and Megan) and if you need more royal family in your life, this is an entertaining read.

So, I kind of expected Daisy to have a slightly different interaction with the tabloids.  I don’t know, the summary made it seem like the attention she was getting was a lot more attention then she really did.  I was kind of let own by with what actually led her to going over to Scotland.

In general, I feel like what happened in the book didn’t match up with what I thought would happen.  I thought there would be more rewriting the royal rulebook and going along for the ride with the prince’s younger brother.  Or getting dragged along, as the case may be.  Don’t get me wrong, it was still enjoyable, and it’s very much a Rachel Hawkins book.  I think I just had a different idea of what would could happen, and it didn’t match up with what actually happened.

So, this is definitely an alternate-reality Scotland where Scotland has a king and queen.  Which I just went with, but keep that in mind if you pick this up.  Also, there are mentions that the Scottish royal family paid for the medical bills for Miles’ mother.  I don’t know much about the healthcare system in Scotland, but that seemed a little off.  I’m not sure how much research went into the book, as far as life in Scotland goes, but based on some reviews I’ve read, it seems like Hawkins got some things wrong.  While I can’t speak to the accuracy of things like healthcare and tuition in Scotland, keep in mind that some things may not be accurate, if those things are important to you.

I liked Daisy well-enough, and I really liked her dad.  Miles was sweet, and I do like him and Daisy.  I didn’t really care for Daisy’s sister, but I felt like I understood her better by the end of the book.  I also thought Daisy’s story was pretty resolved in this book, so while it’s the first book in the series, Royals functions as a stand-alone pretty well.  And based off of what I’ve seen for the second book in this series, I get the sense that it’s a series where each book focuses on a character who was introduced in one of the other books.  Maybe I’m wrong about that (we’ll have to wait and see, I suppose) but hopefully, we’ll get more of Daisy’s story.  I do want to see what she’s up to.

3 stars.  I liked Royals, and it’s fun and entertaining.