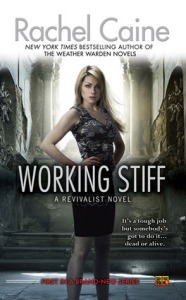 Bryn Davis knows working at Fairview Mortuary isn’t the most glamorous career choice, but at least it offers stable employment–until she discovers her bosses using a drug that resurrects the clientele as part of an extortion racket. Now, Bryn faces being terminated–literally, and with extreme prejudice.

With the help of corporate double-agent Patrick McCallister, Bryn has a chance to take down the bigger problem–pharmaceutical company Pharmadene, which treats death as the ultimate corporate loyalty program. She’d better do it fast, before she becomes a zombie slave–a real working stiff. She’d be better off dead…

This is a book that I’ve had on my shelf for a while, and it’s weird I haven’t read it yet, especially considering I’ve really liked Caine’s other series.

It’s very different from Outcast Season and Weather Wardens (her adult urban fantasy/paranormal series) and her Morganville Vampire series.  And even her steampunk Library Of Alexandria series.  You’d think I’d be all over her take on zombies, but I wasn’t.  It just wasn’t what I thought it would be.  I was bored and not interested in Bryn and the pharmaceutical company and what they were up to.  It was dull and slow, and it felt like nothing was happening.

Apparently, I’m not going to love every single thing she writes, but I was still hoping to like this one more than I actually did.  I feel like I’m pointing out the obvious, but I had a hard time getting through the book.  I think, if it were any other author, I might have not finished the book, but I’ve enjoyed her books enough that I read more of it than I would have otherwise.

Things felt muddled, and in terms of the world, it just wasn’t there.  I wish it were, obviously, but maybe the other books, if I ever pick them up, are a lot better.  Maybe this series needs some time to get to the level of story I’ve come to expect from Caine.  As much as I like her books, I just don’t know if it’s enough to continue this series.

2 stars.  Working Stiff has a really cool premise, but unfortunately, it just didn’t work for me.