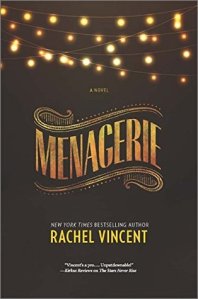 When Delilah Marlow visits a famous traveling carnival, Metzger’s Menagerie, she is an ordinary woman in a not-quite-ordinary world. But under the macabre circus big-top, she discovers a fierce, sharp-clawed creature lurking just beneath her human veneer. Captured and put on exhibition, Delilah is stripped of her worldly possessions, including her own name, as she’s forced to “perform” in town after town.

But there is breathtaking beauty behind the seamy and grotesque reality of the carnival. Gallagher, her handler, is as kind as he is cryptic and strong. The other “attractions”—mermaids, minotaurs, gryphons and kelpies—are strange, yes, but they share a bond forged by the brutal realities of captivity. And as Delilah struggles for her freedom, and for her fellow menagerie, she’ll discover a strength and a purpose she never knew existed.

I really liked Menagerie!  It’s a really cool concept and I liked the mythology behind it.

I felt really bad for Delilah and everyone at Metzgers.  They’re treated horribly, and they’re seen as not human, even though quite a few of them have the appearance of being human.  It’s creepy and awful and you slowly realize how helpless Delilah, and everyone else at the Menagerie are.

I did like the mystery surrounding what type of cryptid Delilah was.  It fit her pretty well, and I thought it worked really well with the story.  While I wasn’t trying to figure it out, I can’t say I’m completely surprised by it.  Considering what we see of her, it does fit.  I can’t say I’m surprised by a character like Delilah, because I kind of figured that we’d have a character like her.

We do have multiple POV in Menagerie, and while the writing style was pretty much the same for each one, I thought each perspective was very different, and showed what it was really like at Menagerie.  It seems like Delilah has a pretty…unique…experience there, and not completely representative of life at Metzger’s Menagerie.

There is violence (and rape) so this book is definitely for adults, though some older teens may be able to handle it.  It is unsettling, and makes it clear that the many people in the book will do whatever they want to the cryptids.  There is no fighting back for the cryptids, because no one cares what happens to them.

One thing I wish we got more of was the Reaping.  We do get snippets of an event called the Reaping, where hundreds of thousands of children go missing or dead, and their entire families are killed.  I wish it were more clear what it was, and what was behind it.  I mean, there are two more books after this one, so there’s always the chance we’ll learn more about what happened.  It’s clear that something led to how the cryptids are treated, and I did want more about what happened.

Still, VIncent created a pretty convincing world, and I feel like you could draw a lot of parallels between the world of Menagerie and our world.  She doesn’t refer to real world events or atrocities, and she has her own story, but still, I think you could draw your own conclusions.

4 stars.  I really liked it, and I thought the world was unique but familiar.  I wish we had more about the reaping and the cryptids, but perhaps we’ll see that in the next book.