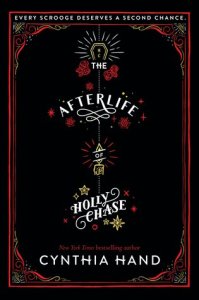 Book: The Afterlife Of Holly Chase by Cynthia Hand

On Christmas Eve five years ago, Holly was visited by three ghosts who showed her how selfish and spoiled she’d become. They tried to convince her to mend her ways.

And then she died.

Now she’s stuck working for the top-secret company Project Scrooge–as the latest Ghost of Christmas Past.

Every year, they save another miserly grouch. Every year, Holly stays frozen at seventeen while her family and friends go on living without her. So far, Holly’s afterlife has been miserable.

But this year, everything is about to change…

I really liked Afterlife, and it’s a really interesting take on A Christmas Carol.  I like that they try to do some good, and actually help people.  It’s light and silly and Holly is not a likable person, in life or death, but I do think she learned from her time at the Project Scrooge.  At least, that’s what I’d like to think.  She seems to try at the end of the book, and it really did seem like she wanted to make an effort to be a better person.

It is interesting that Ethan is what gets Holly to start seeing things differently.  Even years after her death, she was still the spoiled brat we saw int the beginning of the book.  Why Ethan changed things, I don’t know.  It is explained, but…I don’t know.  It’s just interesting that someone her age is what got her to change.  It seems like she was more changed by making this work than he was.

It is a quick read, and it’s fun.  It’s entertaining, and while it’s not this meaningful look at changing yourself, it did get the point across.

I also liked how each group had a team, and everyone worked together to make it happen.  It’s definitely a lot of work, and while you think it’s about Ethan, it’s really about Holly.  I don’t know about anyone else, but that did surprise me a little.  I wasn’t too fond of Ethan, and while I wanted to like some of the other characters we see in the book, we unfortunately didn’t see them enough.  At least, not long enough to have a strong opinion of them.

3 stars.  I liked The Afterlife Of Holly Chase, and it is a cool take on A Christmas Carol, but I wish we saw more of some of the other characters.