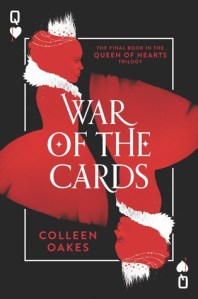 Book: War Of The Cards by Colleen Oakes

The final book in the twisted YA trilogy re-imagining of the origin story of the Queen of Hearts.

Dinah has lost everyone she ever loved. Her brother was brutally murdered. The wicked man she believed was her father betrayed her. Her loyal subjects have been devastated by war. And the boy she gave her heart to broke it completely.

Now a dark queen has risen out of the ashes of her former life. Fury is blooming inside Dinah, poisoning her soul and twisting her mind. All she has left is Wonderland and her crown, and her obsession to fight for both. But the war rages on, and Dinah could inherit a bloodstained throne. Can a leader filled with love and rage ever be the ruler her kingdom needs? Or will her all-consuming wrath bring Wonderland to its knees?

This is not a story of happily ever after.

This is the story of the Queen of Hearts.

I’ve been with this series since the very beginning, and while I’m sad to see it end, I also thought it was a great ending to the series.  I remember reading ARC’s of the first two books on netgalley years ago, and I’ve been anxiously awaiting this book ever since.  I’m really glad I finally read it!

There were things I did not see coming, and I really felt for Dinah.  I have, for the entire series, and in particular, everything with Wardley and her (biological) father broke my heart.  More so with Wardley than anything else, because I was wondering how things would work out for them.

It’s definitely the strongest in the series, and Dinah has changed a lot.  You’d want (and hope) that the last book of a series would be the strongest, and this book delivered on that.  I could picture the battle so clearly, and yet, it was pretty gory, so keep that in mind if you decide to pick this up.

And the epilogue…I have mixed feelings about it.  I don’t understand why Wardley did what he did, considering how things went between him and Dinah, but there was something very hopeful about the epilogue as well.  Like things are okay, and will continue to be okay.  I’m glad there’s hope for Wonderland, and that the series ended with some hope that things would get better.

5 stars.  War Of The Cards is a great ending to a great series, and I absolutely loved the book and Dinah.