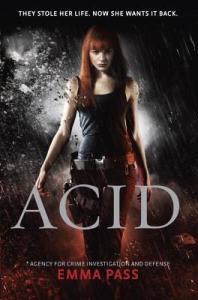 Fans of Matched and Divergent will be hooked by this fast-paced, nail-biting survival story, featuring an unforgettable heroine reminiscent of Katniss Everdeen and The Girl with the Dragon Tattoo’s Lisbeth Salander.

The year is 2113. In Jenna Strong’s world, ACID—the most brutal controlling police force in history—rule supreme. No throwaway comment or whispered dissent goes unnoticed—or unpunished. And it was ACID agents who locked Jenna away for life, for a horrendous crime she struggles to remember. But Jenna’s violent prison time has taught her how to survive by any means necessary. When a mysterious rebel group breaks her out, she must use her strength, speed, and skill to stay one step ahead of ACID and try to uncover the truth about what really happened on that terrible night two years ago. They’ve taken her life, her freedom, and her memories away from her. How can she reclaim anything when she doesn’t know who to trust?

I liked ACID!  I think, had I read this book a few years ago, I would have loved it.  I don’t know if I’d read a lot of dystopia over the years, and so I didn’t love it the way I might have a few years ago.  But I did like it.

The police force in this novel is horrible.  No bad deed is unpunished in this world, and what makes this book so terrifying is that they will do anything to keep dissent squashed down.  While we get the basic idea of how they took over, we don’t get a clear grasp of this world and what it’s like.  We know people are told who to marry, where to work and where to live, and everything get reported.  It seems like the rest of the world is okay, but that’s not too clear, since it seems like the UK is pretty isolated.

I did like the news articles and letters and transcripts of conversations between ACID agents.  It’s a different and cool way of giving us information about this world and what’s going on.  It would have been a lot cooler had the events of the book felt less random.

It started off really strong, and somewhere along the way, it lost that special something that initially drew me in.  Certain things were underdeveloped, and it felt like the book had wandered off-course before righting itself.  I don’t know that Divergent is an accurate comparison, because I didn’t really get that vibe from the book at all.  I feel like Matched is pretty spot on, and I’d even say that Delirium is another good read-alike.  Those two series are probably the most similar to this one.

It was still a fun read, even though though some things are far-fetched, and not really explained.  It would make a great movie though, I will admit that.

3 stars.  I liked ACID, and it was entertaining to read, but it started off strong and then tapered off as the book went on.