Book Review Round-Up is a random feature where I talk about several books in one post.

Today is Volumes 2, 3, 4, & 5 of Vampire Knight.  I thought it might be good to review them together!  I did go through them pretty fast, and they all started to blend together, so I had a little bit of trouble remembering which thing happened in which volume!  All four volumes are by Matsuri Hino. 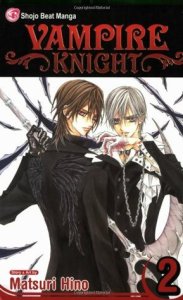 What It’s About: Yuki and Zero go into town to do some shopping for the Headmaster, and they are attacked by a fiendish vampire called a “Level E.”  Two Night Class students, Takuma Ichijo and Senri Shiki, come just on time and slay it, and invite Yuki and Zero to their dormitory at midnight to find out why they killed one of their own kind…

What I Thought: I really liked it!  I am amazed at how she can tell a story with so little words and such detailed artwork!  Yuki and Zero really stood out to me, and I love how kind Yuki is, even knowing that Zero is coming to terms with being a vampire.  I liked seeing more of the vampires in this world, and I feel like as we get further into the series, we’re going to learn a lot more about the vampires!  I’m really curious about whether Yuki offering her blood to Zero will come again, and what sort of effect it will have on things.  Zero is definitely brooding in this book, which I totally understand but I also wonder if he’ll start to move on at some point.  And his former vampire hunter teacher is around, so I can’t wait to see where that goes.

My Rating: 4 stars.  I really liked the story and some of the things that come up, because I’m really curious about where things are headed. 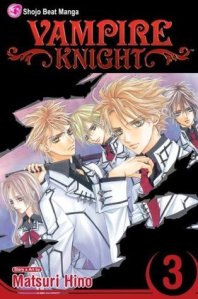 What It’s About: Kaname, the pureblood vampire, has kept to his room since learning of Yuki and Zero’s forbidden act. However, the arrival of Ichijo’s grandfather brings the entire Night Class together to greet one of the oldest vampires on the senate. Ichijo’s grandfather says he’s there merely to visit his grandson, but he’s out for Kaname’s blood.

What I Thought: I really liked Volume 3!  We learn more about the characters, especially Yuki, and I really liked the flashbacks!  Kaname, Zero and Yuki are all very connected.  And the new transfer student, Maria…there is more to her, and I’m curious about where her story is headed.  It seems a little random, a new transfer student but I feel like there’s a purpose behind it.  New students don’t randomly show up for no reason.  We are getting deeper into this world and how things outside the school are affecting things inside the school.  And the concept of the Senate is introduced in volume 3.  I’m wondering how much of a presence they’ll have in future volumes.  I really liked the art, and both art and story are getting better with each volume.

My Rating: 4 stars.  I like that 3 volumes in, we are learning so much more about this world.  I can’t wait to see where things go. 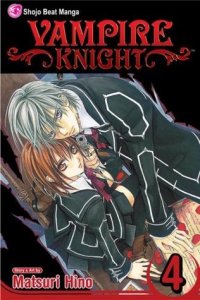 What It’s About: Zero warns Yuki to stay away from Maria Kurenai, the new Night Class transfer student, although he won’t tell Yuki why. Kaname is also wary, and he sends Ichijo to watch Maria so she doesn’t start trouble. Who is this girl, and why does she have the entire Night Class on edge?

What I Thought: This is the book where we learn what’s really going on with Maria!  I don’t know why I didn’t see it coming, because I feel like I should have.  There’s the deal between Yuki and Maria and Kaname is pretty awesome.  And I feel for Zero, even though he still has a lot he needs to work on.  And he’s pretty sulky too.  But I still love him, and I still feel for him.  I also love the side bars she has throughout the book (and the ones in volumes 2 and 3 are equally as awesome).

I am having trouble keeping the characters who aren’t Yuki, Zero and Kaname apart, but hopefully as the series goes on, I’ll be able to tell them apart!  I really want to learn more about the Purebloods and their powers.  I feel like it’s going to come up again in the series.

My Rating: 4 stars.  The story is really starting to get interesting, and the artwork is getting better and better! 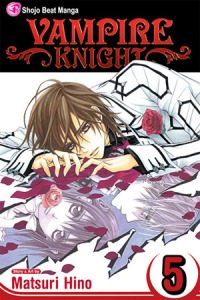 What It’s About: Zero is suspected of killing Shizuka Hio, the pureblood vampire who murdered his family. Incensed, the vampire senate sends assassins to Cross Academy to execute him. Will the Night Class intervene, or will Kaname let Zero take the fall?

What I Thought: I am hooked on this series!  I have been since the first volume but this volume is really good!  We learn why Shizuka did what she did.  I tried to dislike her but I had a really hard time doing that- in fact, the opposite happened, and I felt a little bad for her.  Even though Shizuka has died, I can’t help but wonder if we’ll see more of her in flashbacks.  Things don’t look good for Zero, but Kaname shows that he’s pretty awesome by defying the Senate and protecting the school and Zero.  We also meet a certain someone, and I’m wondering if that certain someone is going to show up again.  I feel like we will, and I can’t wait to see how that will go.  There really is a lot to Kaname, and I want to know more more about him.  I’m sure more will be revealed about him in the continuing volumes, so I’ll just have to read to find out!

My Rating: 4 stars.  As usual, the artwork and story is getting better with each volume, and we learn more about this world the further we get into the series.  I can’t wait to see what happens next.