Book Review Round-Up was a series of posts I did a few months ago to talk about the books I was reading but couldn’t muster up the ability to do a full review for.  It seemed oddly appropriate for these 2 books. 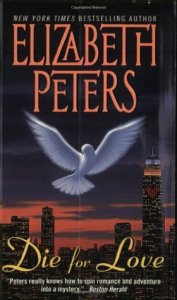 Where I Got It: I borrowed the paperback from a friend

What It’s About: This Mystery Writers of America Grand Master, who writes as both Elizabeth Peters and Barbara Michaels, has long been a favorite with romance readers. In Die for Love, she offers a satirical look behind the scenes at a fictitious romance writers’ convention. Jacqueline Kirby (the sharp-tongued, quick-witted, good-looking librarian from Coldwater College, Nebraska) is eager for any legitimate-sounding business trip to add some excitement to her life. But she’s swept off her feet by dangerous deceptions when she attends a gathering of historical romance writers and their fans — and finds that murder is on the agenda. It’s going to take all of Jacqueline’s considerable skills to determine who is the deadly criminal among the myriad agents, authors, journalists, and fans who have gathered for this event — each of whom seems to have something to hide.

What I Thought: Die For Love was fun to read!  There certainly was a lot of mayhem and sneakiness going on, and it was fun to be along for the ride, even though I didn’t try to figure out the mystery.  I could picture the characters and events so well, and I’m curious about what this book would look like if it were to take place today.  It’s a cozy mystery and yet it’s fun, funny and light-hearted.  And it pokes at romance novels in a good way.  I also really like that the book stands alone really well, and that even though it’s the third book in the series, you start off with the third book in the series and still know what’s going on.

My Rating: 3 stars for being an entertaining poke at romance novel land.

Book: The Murders Of Richard III by Elizabeth Peters

Where I Got It: I borrowed the paperback from a friend

What It’s About: When attractive American Jacqueline Kirby is invited to an English country mansion for a weekend costume affair, she experts only one mystery. Since the hosts and guests are all fanatic devotees of King Richard III, they hope to clear his name of the 500-year old accusation that he killed the little princess in the Tower of London. Jacqueline is amused at the group’s eccentricities until history begins to repeat itself. A dangerous practical joker recreates famous fifteenth-century murder methods – beheading, poisoning, smothering, and even drowning in a butt of malmsey. As the jokes become more and more macabre, one at last proves fatal.

Jacqueline puts all her observations together for a dazzling solution that will surprise even the most attentive reader.

What I Thought: Like Die For Love, Murders was a fun read.  This book, however, is about a group of devotees of Richard III, and how hellbent they are on proving his innocence for the murders of his nephews.  Peters had the most concise, easy to understand explanation of that time period.  I love Tudor history, and most of the details of the War Of The Roses go over my head, and yet she managed to explain it in a way that made sense!  It definitely felt well-researched, and I was reminded of Austenland, for some reason.  Since the book was originally published in the ’70’s, I’m curious about what the book would be like if it were published today.

My Rating: 3 stars.  It was a fun read, and the Ricardians are quite the group of characters.  All of the history in it wasn’t overwhelming, and it didn’t bog down the book!

2 thoughts on “Book Review Round-Up: Die For Love And The Murders Of Richard III by Elizabeth Peters”