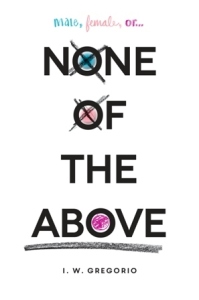 Book: None Of The Above by I.W. Gregorio

A groundbreaking story about a teenage girl who discovers she’s intersex…and what happens when her secret is revealed to the entire school. Incredibly compelling and sensitively told, None of the Above is a thought-provoking novel that explores what it means to be a boy, a girl, or something in between.

What if everything you knew about yourself changed in an instant?

When Kristin Lattimer is voted homecoming queen, it seems like another piece of her ideal life has fallen into place. She’s a champion hurdler with a full scholarship to college and she’s madly in love with her boyfriend. In fact, she’s decided that she’s ready to take things to the next level with him.

But Kristin’s first time isn’t the perfect moment she’s planned—something is very wrong. A visit to the doctor reveals the truth: Kristin is intersex, which means that though she outwardly looks like a girl, she has male chromosomes, not to mention boy “parts.”

Dealing with her body is difficult enough, but when her diagnosis is leaked to the whole school, Kristin’s entire identity is thrown into question. As her world unravels, can she come to terms with her new self?

I loved None Of The Above, and I have the feeling it’s going to end up on my end-of-year favorites list!

I really felt for Kristin, and there were points were I was really angry at her classmates for how they acted. Granted, it’s not surprising, and it seems like they don’t care to know more about it, because they certainly have a lot of misconceptions.  They were just so cruel, and I couldn’t help but be angry on her behalf.  I loved the relationship she had with her dad, who was really supportive.

I really felt like I got to experience the journey with her, and it really opened my eyes to what it’s like to be intersex.  (Much more than Golden Boy, and I think this one is the better of the two).  I also loved that Gregorio had an author’s note at the end of the book about why she wrote None Of The Above, and she even had a recommended reading list at the end- granted, it’s only a few books, plus a few articles and websites to check out.  Reading None Of The Above, it felt like the story was really important (and it definitely is, because I really believe it’s a story that needs to be told) but that author’s note really made me believe it was important for her to tell Kristin’s story.

I also thought that the other relationships were interesting- particularly with her two best friends.  I wish I could remember their names right now, but one gets blamed for telling the entire school, when it wasn’t her fault.  And there’s her other friend, who mentioned it to Sam, Kristin’s ex (she thought he knew), and that was how it spread to the entire school.  Given how supportive she was, it did seem like she was involved somehow, like she was trying to make up for something.  I don’t blame her for it, because she really didn’t mean to, but at the same time, so much happened because of it.  And that character being kind and sweet…I had a hard time seeing it because I had a hard time seeing it as who she really was, instead of the way I saw it: as trying to make up for accidentally telling someone.

5 stars.  This book is really special, and I loved it!

2 thoughts on “Book Review: None Of The Above by I.W. Gregorio”