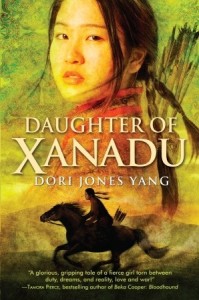 Athletic and strong willed, Princess Emmajin’s determined to do what no woman has done before: become a warrior in the army of her grandfather, the Great Khan Khubilai. In the Mongol world the only way to achieve respect is to show bravery and win glory on the battlefield. The last thing she wants is the distraction of the foreigner Marco Polo, who challenges her beliefs in the gardens of Xanadu. Marco has no skills in the “manly arts” of the Mongols: horse racing, archery, and wrestling. Still, he charms the Khan with his wit and story-telling. Emmajin sees a different Marco as they travel across 13th-century China, hunting ‘dragons’ and fighting elephant-back warriors. Now she faces a different battle as she struggles with her attraction towards Marco and her incredible goal of winning fame as a soldier.

I like that Emmajin wanted so much to be a soldier, but realized it wasn’t what she wanted after fighting in battle.  I’m usually not the biggest fan of characters like Emmajin, but I actually liked her a lot, and she did seem pretty vulnerable at times.  She is a warrior woman, but not in the traditional sense.

It was really nice to see a YA historical fiction set in Asia!  I read a lot of European historical fiction, so something set in Asia is really different for me.  I really liked the map, and how the places had a modern correspondent.  I also liked the glossary and the family tree, because I know nothing about the Mongols or this time period.  It’s actually a really good introduction to the time period and place.

I’m not sure how I feel about the tentative romance between Emmajin and Marco Polo.  I think I might have been fine without, because there was something about it that felt like it was just there, and I didn’t believe in them as a couple.  But I also felt like meeting him provided Emmajin with some new opportunities, and a different path than she expected.  I also felt like meeting him, and people from neighboring countries opened up her world.

I liked it enough that I might read the sequel someday.  Part of me is curious where the story is headed (clearly, Emmajin is going to be travelling, but other than that I couldn’t begin to hazard a guess), but at the same time, things are resolved enough that could work quite well as a stand-alone.