Nail Polish Talk is a once-a-month feature where I talk about all things nail polish- from the colors I wore to the colors I got.

In June, I wore Nellie (with Adele as a top coat), Octavia, Sam, Farrah, and Hazel.

Technically, Nellie (by Julep) was a May color, since it was the week of May 31, but I decided to talk about it in June, since most of the week happened in June.   I love Adele (also Julep), which is one of my favorite top coats, and I wish it weren’t a retired color, because that makes me not want to wear often because I don’t want to run out of it.  I wasn’t sure about Nellie, because it’s fuschia, and fuschia is not a color I normally go for.  But I liked it a lot more than I expected, especially with Adele on top!

I also wore Octavia (Julep), which I like!  It’s a dark indigo, but pretty, and I really want to wear it again.  Other than that, I don’t have anything else to say about it.

Next was Sam (it’s Julep, and part of June’s Maven box, so we’ll talk about that later).  It reminded me of a highlighter, and it was more green than it was yellow.  I like it, but I didn’t love it, and I might wear it again.  It’s described as limeade, which is fairly accurate, but on the website, it did look more yellow, so I was surprised that it was more green with some yellow.  What I also thought was interesting was that depending on the light, it sometimes looked more yellow, and sometimes it looked more green.

I also wore Farrah, which I wasn’t sure about at first, but I actually ended up liking it a lot.  It is pretty muted, which I have a tendency to not do with my nails as far color goes.  It’s more grey/stone-colored than lilac, and it goes on very sheer.  It took me three coats to get the color you see in the picture, but two would work if you wanted more coverage.  One would work if you just need a little bit of color or if you need something neutral.  I think, if you work in a place where something like Sam wouldn’t go over well, Farrah actually would work.  I was surprised that it was probably Wednesday before it chipped a little (Thursday the chipping was much more noticeable), considering I had a couple layers of base coat, three of Farrah and a top coat, and overall, it also a pretty forgiving color so if you mess up, it’s not obvious.  It doesn’t look great with pale skin, but again, if you need something neutral/muted, this is a good choice.

And lastly, I wore Hazel (not surprisingly, it’s by Julep).  So, it’s supposed to be a bronze/violet duochrome, but unfortunately, the bronze didn’t show up when I actually put it on.  You could see a little bit of it in the bottle.  It looked pretty, and I really felt like that this week, so that’s what I went with.  I can’t stop looking at it, and I’m glad I wore it because I want to wear it again!  It kind of reminds me of that gold leaf stuff but in purple.  And it’s shiny, which can be really distracting but I don’t care, because I love it! 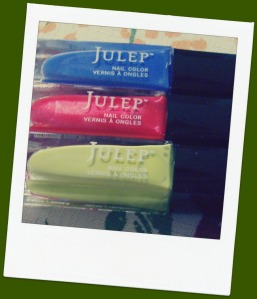 July’s box should be interesting since I opted to get the mystery box they had!  I’m a little nervous about it, but it was either than, or opt out since I wasn’t too into the colors (or the beauty products they had for the month).  I also got a couple of add-ons, which is rare, but I really need a base coat, and one of the colors looked pretty, so I figured I’d go for it, especially since I had some Jules that I could use.  I like their version of a rewards system, and once or twice, I’ve had enough to get a free box or two…not lately, of course, but maybe I’ll get to the point again someday.  I really can’t wait to see what I end up getting!