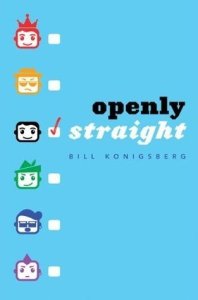 Where I Got It: the library!

You can find Openly Straight on goodreads

A funny, honest novel about being out, being proud…and being ready for something else.

Rafe is a normal teenager from Boulder, Colorado. He plays soccer. He’s won skiing prizes. He likes to write. And, oh yeah, he’s gay. He’s been out since 8th grade, and he isn’t teased, and he goes to other high schools and talks about tolerance and stuff. And while that’s important, all Rafe really wants is to just be a regular guy. Not that GAY guy. To have it be a part of who he is, but not the headline, every single time.

So when he transfers to an all-boys’ boarding school in New England, he decides to keep his sexuality a secret — not so much going back in the closet as starting over with a clean slate. But then he sees a classmate breaking down. He meets a teacher who challenges him to write his story. And most of all, he falls in love with Ben…who doesn’t even know that love is possible.

This witty, smart, coming-out-again story will appeal to gay and straight kids alike as they watch Rafe navigate being different, fitting in, and what it means to be himself.

I have so many thoughts about Openly Straight that I’m not quite sure where to start!  There a lot of things I really like, but there are also things that were really frustrating.

Like, I can relate to Rafe wanting to start over and not do the whole label thing.  It’s something we can all relate to, because we put labels on ourselves.  Others put their own labels on us.  And it’s annoying and frustrating, because we’re more than whatever people label us as.  It’s something we all have to deal with, and it can be hard when it’s all people see us as.

I really understood where Rafe was coming from- people definitely saw him as the gay kid, and didn’t seem interested in who he was beyond that.  His teachers seemed to constantly want the gay opinion (not my words, by the way, it’s phrased that way in the book at one point).  Everyone around Rafe is super-supportive, to the point where he felt like he had to transfer to all-boys boarding school on the other side of the country.  I don’t blame him at all for wanting to get away from it.

A really great example of what he has to deal with is Halloween one year.  He dresses up as an ’80’s rocker chick for Halloween, and everyone’s either uncomfortable (pretty much all of his classmates) or they see it as a statement (his teachers) while a couple of kids at his school (straight, if anyone’s wondering) did the same type of costume the previous Halloween, and everyone thought it was hilarious.

That was one thing that really stood out to me- the fact that he does it, and an uncomfortable statement, just because he’s gay, and yet, it’s really funny when someone who’s straight does it.  It’s something I never thought about before, and it made me sad that so many of his classmates were uncomortable with his costume.  And that people saw it as a statement, even though he didn’t mean it that way- he just thought it would be a great costume.  It’s amazing how people see a type of costume differently, just because of who’s wearing it, and I can totally see people reacting the way they did.

I knew pretty early on that not telling his new classmates he’s gay was going to backfire, especially when he starting falling for his classmate Ben.  Him hiding it was going to end disastrously, and I’m not surprised that it really messes up his relationship with Ben.  However, I really like the message that hiding even a piece of who you are never ends well, and can cause a lot of pain.  And that replacing one label with another can be just as bad, if not worse, than the one you’re trying to get rid of.

I did find myself really frustrated with Rafe at times.  By the end of the book, I was finding myself really frustrated with how he was so tired of people making a big deal out of the fact that he was gay.  I understand where he’s coming from, but at the same time, I felt like he took so much for granted.  With all of the news recently, with teens killing themselves because of bullying, I really felt like Rafe didn’t realize how lucky he was that he wasn’t bullied and that everyone in his life was supportive.  His parents are really accepting- they even threw him a coming out party!

It did make me think about whether being really supportive has a negative effect.  It’s still better than the alternative, of course, but is it possible to be too supportive?  It certainly is in Rafe’s case.  It did feel like everyone in Colorado was trying too hard to show how supportive they were, and it just made them feel stereotypical and flat.

Still, even though I’m not too fond of Rafe, sometimes, we learn by making mistakes.  And I really feel for him.  He didn’t want to be defined by his sexuality, and yet, that’s all people seem to expect- that it should define him.  You see it more in the flashbacks of his life in Colorado, but I am curious about how it relates to his life at boarding school now  that he’s come out to his new classmates.

I do have mixed feelings.  There are things I like (don’t be someone you’re not, we all have to deal with labels, regardless of who you are) but those are overshadowed by other things, like how much Rafe seemed to take for granted, how uber-supportive everyone else was, and how predictable certain things were.  I will say that he did seem to appreciate how lucky he is to have the parents he does, and that certain things needed to be predictable in order for him to realize that he needed to be himself- his whole self and not just part of it.  But it still took away from the story a little bit.  I still recommend it, because I did start thinking about things I would never think to think about.  Openly Straight gets 3 stars.