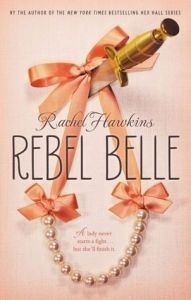 Where I Got It: the library!

You can find Rebel Belle on goodreads

Harper Price, peerless Southern belle, was born ready for a Homecoming tiara. But after a strange run-in at the dance imbues her with incredible abilities, Harper’s destiny takes a turn for the seriously weird. She becomes a Paladin, one of an ancient line of guardians with agility, super strength and lethal fighting instincts.

Just when life can’t get any more disastrously crazy, Harper finds out who she’s charged to protect: David Stark, school reporter, subject of a mysterious prophecy and possibly Harper’s least favorite person. But things get complicated when Harper starts falling for him–and discovers that David’s own fate could very well be to destroy Earth.

With snappy banter, cotillion dresses, non-stop action and a touch of magic, this new young adult series from bestseller Rachel Hawkins is going to make y’all beg for more.

I can’t believe it took me so long to read Rebel Belle!  After reading Hex Hall, and hearing Rachel Hawkins speak at a panel at the LA Times Festival Of Books, I really wanted to read it.

It has the same sense of humor and snark that Hex Hall has, but with Paladins and Mages and Oracles.  Which I really like, because how often do you see modern-day Paladins?  I really liked the tie-in to history, and how it’s the same, yet different. I really like the connection between Harper protecting David, and the similarities to a previous Paladin.

I also love that Harper is a southern belle and Homecoming Queen turned Paladin.  It initially seems like an odd combination, but it also works really well, because it’s something you wouldn’t expect.  I like that she initially doesn’t want to do it, but comes  around.  It’s not uncommon in YA to see something like this, but somehow, when Hawkins does it, it makes the character seem more real.

The world she lives in and the hilarity that ensues really reminded me of Hart Of Dixie, which is one of my favorite t.v. shows! If you love Hart Of Dixie, I think you’ll like this book.  But with paranormal goings on, of course.

I liked Harper, especially once she stopped being Little Miss Perfect.  She had her life perfectly planned out, and I liked that she struggled with things not going as planned, and that she seemed more okay with it by the end of the book.  I also liked that she had to work with someone she didn’t like, but eventually warms up to.  Like, a lot.  Granted, it’ll make things awkward, with how the book ends, but I’m also curious about how that will play out in the rest of the series.  I like seeing Harper adapt to new situations but I also understand her wanting to be perfect.  I didn’t completely love her (or the romance…the first one) but she’s still a great character.

Her boyfriend throughout most of the book didn’t work for me, so I’m actually glad they’re not together.  I’m not completely sure about her new romance either, but that works so much better for me.  It seems so much more believable and they have more chemistry than she had with her previous boyfriend.  They do seem better matched, and not just because of everything going on.

Rebel Belle was so much fun to read!  It’s a really good balance of the slightly serious and the really entertaining sarcasm and hilarity.  Rebel Belle gets 4 stars.