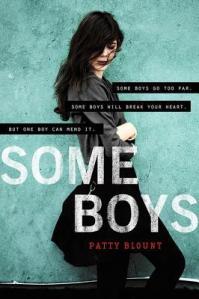 Book: Some Boys by Patty Blount

Where I Got It: I own the e-book, courtesy of the Nook store

Some girls say no. Some boys don’t listen.

When Grace meets Ian, she’s afraid. Afraid he’ll reject her like the rest of the school, like her own family. After she accuses Zac, the town golden boy, of rape, everyone turns against her. Ian wouldn’t be the first to call her a slut and a liar.

Except Ian doesn’t reject her. He’s the one person who looks past the taunts and the names and the tough-girl act to see the real Grace. He’s the one who gives her the courage to fight back.

“A bold and necessary look at an important, and very real, topic. Everyone should read this book.” – Jennifer Brown, author of Thousand Words and Hate List

A gut-wrenching, powerful love story told from alternating points of view by the acclaimed author of Send.

I really liked Some Boys, and it’s the first book in a while that I’ve been excited about reviewing!

Some Boys made me sad and angry…sometimes at the same time.  I HATED how everyone treated Grace after her rape, and how everyone thought it was her fault, and that she deserved it, because she was drunk and because of how she dresses.  I hated how everyone turned against her because no one wanted to believe that the town golden boy was capable of rape.

It really made me so sad for Grace, who had no one on her side- except for her mom.  She really seemed like a good kid, and she really doesn’t deserve anything that happened to her.  It just made no sense to me that no one believed her or was willing to stand up for her.  I liked that she didn’t leave school and study abroad and I liked that she stayed strong, and didn’t give up hope that things would get better.

I thought Some Boys really highlighted rape culture, and how we still see women as deserving it and how people believe someone like Zac isn’t capable of it.  It’s nothing new, but I liked that you felt for Grace, and it really came through that she went through something horrible.

I also loved that part of the book was narrated by Ian, who is Zac’s best friend.  There were times when I hated Ian, because he just stood by and let people say horrible things about Grace, even though he was the only person talking to her willingly.  He really struggled with doing the right thing, but in the end, he did the right thing.  There were hints at a potential romance between Grace and Ian, and I’m sure some people will dislike the fact that he’s why everyone eventually believed Grace’s story. I wasn’t bothered by it because he was Zac’s best friend, and because I feel like he really did change, and that he wanted to change.

The only thing that I didn’t like about the book was the ending.  I just didn’t like that Grace was so forgiving of everyone else, and that it was as though the last few weeks didn’t happen.  It was just too nice and neat, and I felt like Grace was way too forgiving of a town that put her through hell.  Maybe she wanted things to go back to normal, and maybe people were on her side, but were too scared to speak up, but I felt like it didn’t fit with the rest of the book.  I’m glad everyone finally believed her but I wish she didn’t forgive so easily.

Overall, I really liked Some Boys, and how it highlights how ridiculous and horrible people can be when it comes to rape. I didn’t care for the ending, and unfortunately, I thought the book was great up until that point.  I still highly recommend this book! Some Boys gets 4 stars.