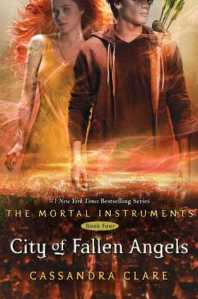 Where I Got It: the Nook store

The Mortal War is over, and sixteen-year-old Clary Fray is back home in New York, excited about all the possibilities before her. She’s training to become a Shadowhunter and to use her unique power. Her mother is getting married to the love of her life. Downworlders and Shadowhunters are at peace at last. And—most importantly of all—she can finally call Jace her boyfriend.

But nothing comes without a price.

Someone is murdering Shadowhunters, provoking tensions between Downworlders and Shadowhunters that could lead to a second, bloody war. Clary’s best friend, Simon, can’t help her—his mother just found out that he’s a vampire, and now he’s homeless. When Jace begins to pull away from her without explaining why, Clary is forced to delve into the heart of a mystery whose solution reveals her worst nightmare: she herself has set in motion a terrible chain of events that could lead to her losing everything she loves. Even Jace.

The stakes are higher than ever in the #1 New York Times bestselling fourth installment of the Mortal Instruments series.

I really liked some of the world-building we get in terms of Lilith and why Jace pulls away from Clary, and that there are some very serious repurcussions to events that happened in City Of Glass.  City Of Glass seemed to wrap up everything really well, and I was worried that City Of Fallen Angels would feel like an afterthought.

So I was glad that City Of Fallen Angels (CoFA) didn’t turn out that way.  (Well, mostly).  With everything that happened in CoG, I wasn’t sure where things would go, or how Clare would keep things going, because I was expecting the Valentine stuff to go for the entire 6 book series, and it mostly didn’t.  I am curious about how the Sebastian stuff will go, and if he’ll continue Valentine’s work, or try to do something even more horrendous.

I really liked a new character we meet in the series.  Jordan (who previously mentioned by Maia) finally makes his appearance, and I liked what he added to the story.  Mostly because we learn a bit more about werewolves in this one, but I think he’ll be an interesting person to have around.

CoFA was predictable, and I should have seen the ending coming.  (Yet, I didn’t see it coming at all).  Oddly enough, though, I don’t mind because it is a fun series to read.  It’s really starting to become clear that this world is a very vivid one, and I wish we got a little bit more of the details of this world.

I liked City Of Fallen Angels, and in terms of the Shadowhunter world, it’s my favorite because of what we learn.  I have a love-hate relationship  with the fast pace of the books.  There’s also something going on, which makes the books go fast, but it makes me feel like some of the little details aren’t there.  Still, it’s been a fun series to read.  City Of Fallen Angels gets 3 stars.