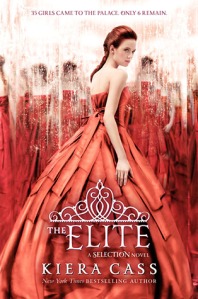 Book: The Elite by Kiera Cass

Where I Got It: Nook Store

Kiera Cass’s The Elite is a must-read for fans of dystopian fiction, fairy tales, and reality TV. This sequel to The Selection will enchant teens who love Divergent and The Bachelor.

In America Singer’s world, a bride is chosen for the prince through an elaborate televised competition. In the second book of the Selection series, America is one of only six girls left in the running. But is it Prince Maxon—and life as the queen—she wants? Or is it Aspen, her first love?

The Elite delivers the adventure, glamour, political intrigue, and romance readers of The Selection expect, and continues the love triangle that captivated them.

With The One coming out in a few months, I figured it was time to read The Elite!  I didn’t like it as much as I was expecting, given how much I loved the first one, but I still liked it!

I liked getting to learn more about the world America lives in, and how the country is really run by Maxon’s dad, who is not a nice dude.  Then again, he’s king, and it’s not at all surprising he loves being in charge and had a big role in selecting the Selection.

I just didn’t like America in The Selection!  She couldn’t decide between Maxon and Aspen and was really indecisive about who she wanted.  I get her indecisiveness, but it just got really frustrating and grating by the end of the book.  She pushed Maxon away, only to be annoyed when he showed interest in the other girls. She had trouble trusting him, even when he confided in her, and kept her distance even though she had feelings for him.

America seemed so much more petty and judgmental in The Elite than she did in The Selection, and while she had her good moments, she was also not as likable as I was expecting her to be.  I’m also not liking Aspen, although I have warmed up to Maxon a little.  I do understand Maxon a little bit better, and I’m thinking he deserves someone better than America, given how she’s acting.

As much as I like the world of Illea, the rebel attacks seem random and aren’t making a lot of sense.  How are they able to get past the security system in the palace two days in a row?  I just have so many questions, and I’m feeling like I’m not getting any answers.

As for the ending, we have another ending that seems really abrupt.  I was hoping it would be a one time thing, but it’s also frustrating because I was expecting more of a conclusion.  It really makes me feel like I’m reading one book that’s divided into parts as opposed to books that have their own story line but also come together to tell a larger story.

I love the world Cass created, and I love the elements of fairy tales and reality t.v. in a dystopic form, but I also wish the books didn’t end so abruptly.  And I also wish we got more explanations for the rebels.  I’m still interested in reading The One, because I want to see if any of my questions get answered, and to see if America finally makes up her mind.  The Elite gets 3 stars.