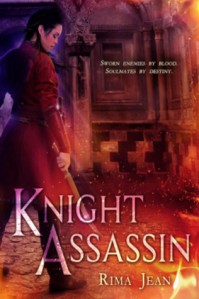 Expected Publication Is March 4, 2014 by Entangled Teen|Expected Number Of Pages: 242

Where I Got It: I received a advanced digital copy from Entangled Teen, which hasn’t influenced my review in any way. Promise!

Seventeen-year-old Zayn has special powers she cannot control—powers that others fear and covet. Powers that cause the Templar Knights to burn Zayn’s mother at the stake for witchcraft. When a mysterious stranger tempts Zayn to become the first female member of the heretical Assassins, the chance to seek her revenge lures her in. She trains to harness her supernatural strength and agility, and then enters the King of Jerusalem’s court in disguise with the assignment to assassinate Guy de Molay, her mother’s condemner. But once there, she discovers Earic Goodwin, the childhood friend who still holds her heart, among the knights—and his ocean-blue eyes don’t miss a thing. Will vengeance be worth the life of the one love she has left?

I wasn’t sure what to expect with Knight Assassin, but I really enjoyed it!  Mostly because it’s an interesting blend of paranormal and historical fiction.  Not only that, but I believe it’s set during the Crusades, which I can’t remember seeing in historical fiction before.

I thought Zayn’s abilities were interesting, especially given how hard she works to be become a trained assassin.  I wasn’t expecting Zayn’s background to be what it is, but it worked really well for where she lives and the time period she lives in. Certain things that happened and certain things Zayn learned…I can’t say I’m surprised, but I also didn’t see them coming!  It all just works so well together, with her abilities and everything that’s happened to her and everything that she goes on to do…I really felt for Zayn, because she’s a pretty sympathetic character.  She’s been through so much, and I don’t blame her for wanting revenge.

I think part of me was expecting a sequel, but as far as I know, there isn’t one in the works.  Things are pretty resolved, and it stands on its own really well, but the ending is also open enough that a sequel is possible.

I love how well the paranormal elements worked with the historical fiction elements.  It did start off a little slow for me, and it did take a bit of time before Zayn gets sent off to the Assassins, but once you get a few chapters in, it gets really interesting. Still, the first few chapters helped set everything up.  Knight Assassins gets 4 stars.