So, I can’t believe it’s May already!  Time is so weird, and I can’t believe I’m recapping April already.  2020 has been the longest year ever, and even though April didn’t feel as long as March, April still felt pretty long.  April was full of familiar things, and I’ve found that I’ve wanted to revisit things I haven’t listened to or read in a while. 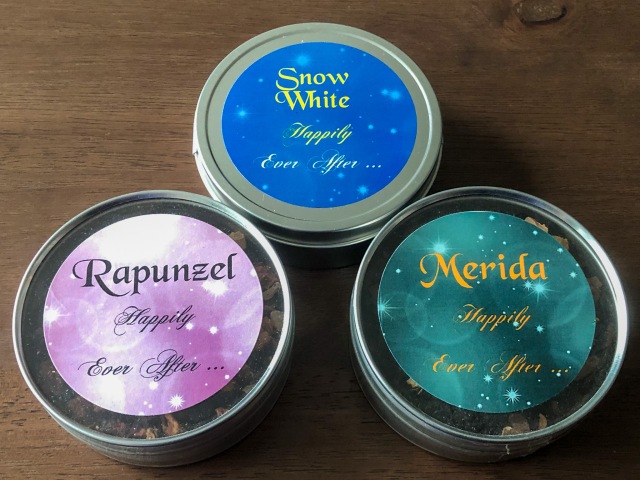 I barely took any pictures last month, and with being at work or at home, there hasn’t been a lot of picture-taking.  But I did get a picture of some of the tea I plan on drinking.  I got it from the Literary Tea Company, and everything I have tried has been really good, so I know they will be too!

Let’s get to the highlights from April!

And that wraps up April!

Stay safe out there,

Hey everyone!  It’s actually good to be back with my monthly wrap-up feature, and I’m really hoping this will come back more regularly.

May was a pretty fun month!  It started off great with YALLWEST, which I already talked about here.  I’m not really going to talk about it again, but I had a lot of fun, and I can’t wait for next year!

So, this is an April thing, and not a May thing, but I have to share a picture of the cake we had at book club in April.  It’s too cool not to share.  I can’t believe it’s been a year already!  The cake was made by celestialsweets, and you can find her on instagram here, if you want to check out her other creations.  All of which look awesome, by the way. 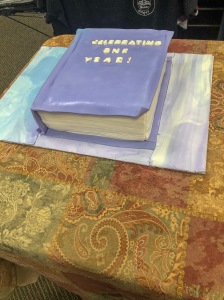 I also had a birthday, which was fun!  I’m pretty sure I ended up with food poisoning, but at least I started feeling the effects of it at the end of the day. 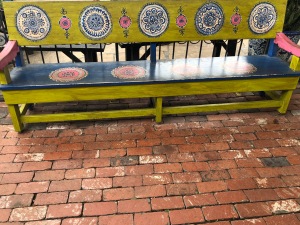 I never realized how cool the benches were at Fiesta De Reyes.  I know that’s super random, but it’s true!  I love how they’re decorated. 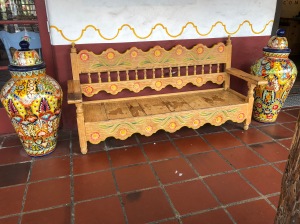 Usually when I go to Old Town, I get my coffee and some candy, and leave but it was a nice day out, so I decided to wander around for a while.  I always get taffy, and every once in a while, I’ll add some other candy too. 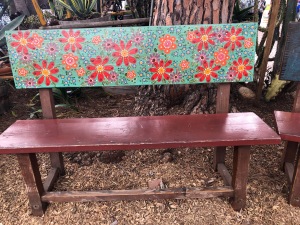 Anyway, Cousins is an old-timey candy shop and it’s fun just to go in and look around.  Even though I didn’t get any tea this time, when I do, I always get the black currant tea and the peach white tea.  I also love their highlander grog coffee.  If you happen to be looking for recommendations for coffee or tea. 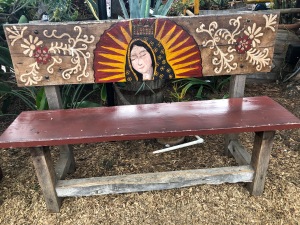 You thought you were done looking at benches, weren’t you? 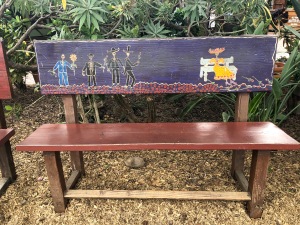 You’d be wrong, because there’s one more! 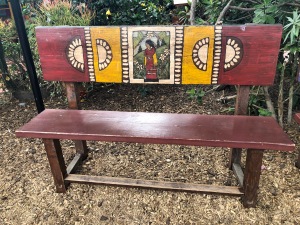 It was definitely a good day to stop and admire this flowers. 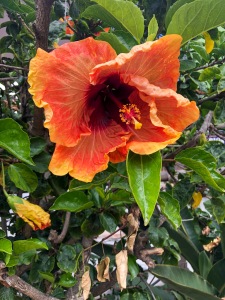 And also these flowers. 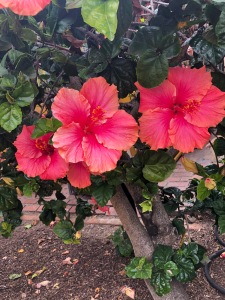 Plus this really cool plant. 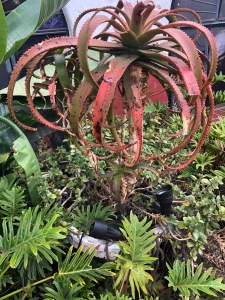 And a huge tree! 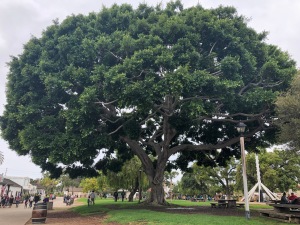 And I don’t know why, but I always have to look at this flagpole! 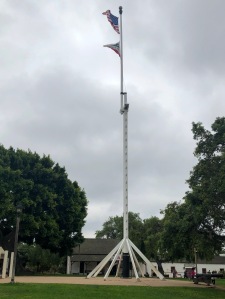 No birthday is complete without ice cream. 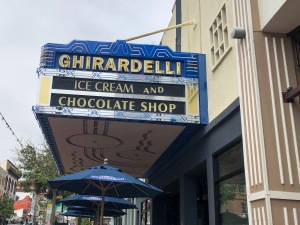 Oddly enough, I didn’t have cake…but I was in the mood for ice cream, that I sadly didn’t get a picture of.  I didn’t think of it until I was done eating.  And of course, since it’s me we’re talking about, I did get some yarn.

I’ve been thinking about making some washcloths and those little face scrubbies.  Since I don’t have a lot of cotton yarn in my stash right now, I stopped by my local yarn store and got some.  I have a few projects going on and I swear, there’s a post coming on what I’m working on.  Not today, because I have zero pictures, and when it comes to craft projects, it’s always fun to actually see them.

That’s all for today, and I hope you have a great day!

Hey everyone!  Today, I’m going to ramble on about yallwest.  I had a lot of fun, and I knew I had to talk about it with all of you.

I drove up from San Diego, and while I was glad I didn’t get any traffic on the way up, I was also glad when I got there.  After being in my car for over 2 hours, it was really nice to get out of my car and be able to walk around. 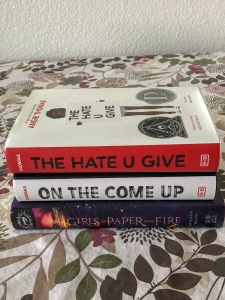 I got a few books signed- I was really excited about getting Girls Of Paper And Fire by Natasha Ngan signed, and I was super-excited about getting The Hate U Give and On The Come Up signed.   I didn’t think to actually get pictures with them, and I honestly didn’t feel like taking a picture of the actual signed pages.  But it was great meeting them, and all three books are great, so it was nice to get them signed.

I also went to a couple of panels.  I went to one that was sci-fi vs fantasy, and it was really fun.  There were definitely some surprising answers to some of the questions asked, but it was really interesting to hear the panel talk about what they like about both sci-fi and fantasy.  Veronica Roth moderated, and Jay Kristoff, Robin LaFevers, Nafiza Azad, Melissa Albert, Tochi Anyebuchi, and Brandon Reichs were on that panel.  I’ve heard that Jay Kristoff is really tall, but I didn’t realize how tall until I saw him on the panel.  I’m 4’10, so everyone is tall from my perspective.  Anyway, I really loved Nafiza Azad’s answer about why she loves fantasy, and it makes me want to read her book even more. 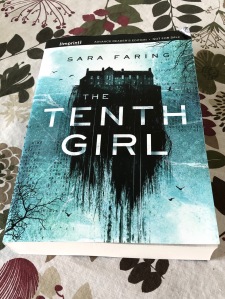 Oh!  I ended up with an ARC of The Tenth Girl.  They were giving them away to the people who went to the Sci-Fi Vs Fantasy panel, and it looks interesting.  I don’t know if I would have picked it up otherwise, but I’m excited to read it.

Right after that one, I went to a panel that focused on writing mysteries and thrillers.  I don’t read a lot of mysteries but it was still really interesting to hear the panel talk about writing and where they got the inspiration for their current project.  Alexia Bass, Gwenda Bond, Sara Farizan, Karen McManus, Matthew Modine, and Gretchen McNeil were on the panel, and it was moderated by Peter Stone.  I’ve only read Gretchen McNeil and Sara Farizan and while I didn’t love their books, I definitely liked hearing everyone talk about how they write.

There’s a lot going on, and as a first-timer, it was really overwhelming.  I didn’t really know where to start or go first, so I wandered around feeling a little lost and confused.  I was okay by the time I ended up leaving, but it was very much deer-in-the-headlights.  At least for a while.  It was pretty well-organized, though, and putting something like this together can’t be an easy task.

I’m definitely appreciative of all of the work that went into it, and I very much appreciated all of the authors who came out and the volunteers who took the time to be there answering questions and keep things going.  I’m glad yallwest is around and close enough for me to go to.

Now that I know where to go, it’ll be easier for future festivals, but for the first time?  It was a little hard navigating, and even with a map and program, I had a hard time with figuring out where everything was.  It’s user error, though, because I can be directionally challenged sometimes. 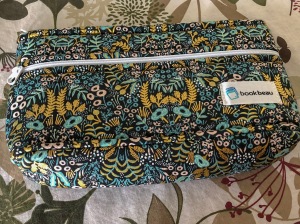 I did get this really cool bag from the Book Beau booth.  It’s a travel size pouch, and it’s super cute.  I would definitely buy a couple bigger sizes from them and in different patterns.  I just fell in love with it, and it’s just so pretty!  Not that I don’t love what I got from them, because I do, but all of the samples they had were really cute.  I kept seeing people walk around with them all day, so I was glad when I actually saw where they got them so I could get one for myself. 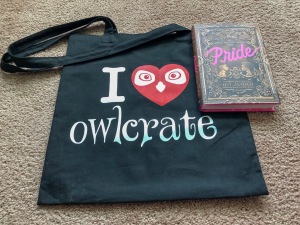 I also made a stop at the Owl Crate booth, and got a tote bag and a signed copy of Pride by Ibi Zoboi.  I ended up moving my books from my bag to the tote bag, which made it a lot easier to carry it around. 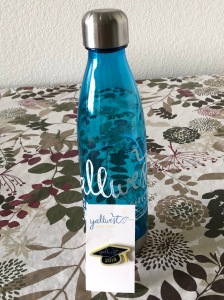 I had a lot of fun, and I’m definitely going back next year.  It’ll be easier now that I know where things are and what to expect.

Here are my takeaways from this year: