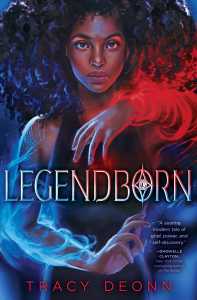 After her mother dies in an accident, sixteen-year-old Bree Matthews wants nothing to do with her family memories or childhood home. A residential program for bright high schoolers at UNC–Chapel Hill seems like the perfect escape—until Bree witnesses a magical attack her very first night on campus.

A secret society of so called “Legendborn” students that hunt the creatures down.

And a mysterious teenage mage who calls himself a “Merlin” and who attempts—and fails—to wipe Bree’s memory of everything she saw.

The mage’s failure unlocks Bree’s own unique magic and a buried memory with a hidden connection: the night her mother died, another Merlin was at the hospital. Now that Bree knows there’s more to her mother’s death than what’s on the police report, she’ll do whatever it takes to find out the truth, even if that means infiltrating the Legendborn as one of their initiates.

She recruits Nick, a self-exiled Legendborn with his own grudge against the group, and their reluctant partnership pulls them deeper into the society’s secrets—and closer to each other. But when the Legendborn reveal themselves as the descendants of King Arthur’s knights and explain that a magical war is coming, Bree has to decide how far she’ll go for the truth and whether she should use her magic to take the society down—or join the fight.

I really liked Legendborn!  I’ll admit, I wasn’t sure about it at first,  but I’m glad I kept reading.

I’m not sure why, but at first, I didn’t particularly like this book.  I struggled to get through it, at least in the beginning.  It’s why it took me so long to finish Legendborn.  But I’m glad I did because I ended up really liking it and needing to know what happened next.

I really felt for Bree- she has so much grief to work through, and at such a young age.  And when we find out what happened to her mom, and why…that really broke my heart, because she’ll never have more time with her mom.  She has a grandmother she’ll never meet, and the reason makes sense, once we know about it.  But that doesn’t take away from the fact that she lost her mom, who lost her mom, and so on.

Honestly, I was surprised when the magical war started.  I mean, I knew it was coming, because how else were things going to go?  But it happened in a way I wasn’t expecting.  It makes me curious to see how things are going to go, but it looks like they were wrong this whole about the different knights and bloodlines.  At least a little, and I want to know how they’re going to deal with it in the next book.  Especially since it became clear that Bree was not who they expected to be involved with things.

I really liked this take on King Arthur.  It’s so different, but it also makes so much sense!  If this world were real, I could see something like this happening.  Or at least, this being how King Arthur is still with us today.  Maybe not these exact circumstances, of course, but something like it.  I’d love to see how all of this fits in with history, and if this secret society randomly popped up in things like the Civil War or the American Revolution.  I feel like something like that was mentioned, but I honestly can’t remember it, so I could be wrong.  But something about that idea feels really familiar.

4 stars.  I really liked Legendborn, and think it’s a book everyone should read!  Especially if you like King Arthur re-tellings.